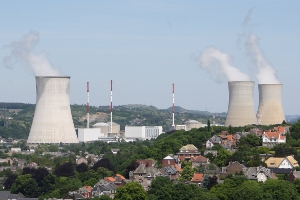 The German states of North Rhine-Westphalia and Rhineland-Palatinate and the Swiss canton of Geneva have filed official complaints with the EU outlining their concerns at the conditions of nuclear power plants in Belgium and France respectively.

The Germans are objecting to the decision of Belgium to extend the 40 year old Doel 1, 2 and Tihange 1 nuclear power stations, which were originally scheduled to be shut down in 2015.
The Belgian government in December decided to extend the lives of the reactors to 2025, under a deal to preserve jobs and invest in the transition to cleaner energy.

The states claimed however that before such a decision could be made, an environmental impact assessment had to be carried out, under a little known international convention called Espoo.

“The impact of an accident in Tihange and Doel would not be stop at the border of Rhineland-Palatinate,” said the state’s energy minister Eveline Lemke, stressing that decisions to extend nuclear plants’ lifetime could not be imposed without consultations with neighbouring countries.

Belgium’s ageing fleet has been causing safety concerns with neighbours for some time after a series of problems ranging from leaks to cracks and an unsolved sabotage incident.

43-year-old Bugey is one of France’s oldest nuclear power plants, and when fully operational, creates about 4.5% of France’s electricity.

“The plant was built in the 1970s without any impact study. It faces a seismic risk, a risk of flooding, and an accumulated risk of earthquake and flooding,” Corinne Lepage, an environmental law specialist and a former French minister, told reporters.

She added that the concrete foundations of the plant were subject to leakage issues, and there were recurrent tritium leaks and cracks in the containment building.

The French nuclear safety authority (ASN) told the 20 Minutes newspaper that the safety of Bugey was “generally satisfactory”. ASN had carried out 35 inspections, and €160m had been invested in safety at the plant.

Last Friday Berlin demanded that France close down Fessenheim nuclear power plant following reports that a 2014 incident there was worse than earlier portrayed.