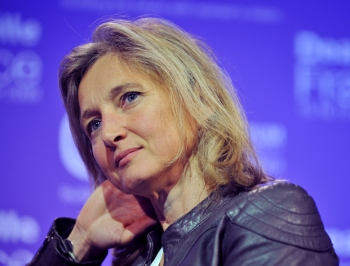 Top GE chief Clara Gaymard has told press in France that Alstom’s nuclear business will remain in France, should GE be successful in a $17bn bid to buy the power equipment manufacturer.

Meanwhile Siemens chief executive Joe Kaeser has left no doubt that his company will not be found wanting in competing for Alstom and any other business in the power generation sphere.

Gaymard(pictured), who is a key part of the GE (NYSE: GE) team negotiating the deal said in an interview, “We will answer the government’s legitimate demands that the nuclear unit remain French, that intellectual property stay French and that exports be protected,” adding that her company’s offer, which excludes Alstom’s (Euronext: ALO) transport business, “is good for France.”

Her comments came shortly after the US company announced an extension to the deadline for the purchase, now put back for three weeks.

GE chief executive Jeff Immelt said he’s confident GE can complete the acquisition, which he expects to close next year. He will meet President Hollande on May 28th, the French president’s office said this week.

In a global live chat, of which Siemens released a transcript on Tuesday, chief executive Joe Kaeser was asked if the company’s challenge for Alstom and the transfer of board level management and power generation business to America represented a ‘declaration of war on GE.’

Kaeser had a bullish response telling the forum, “If any competitor thinks that we’re currently so self-absorbed that we’re ubable to take action anywhere and at any time, they are badly mistaken.”

“Our acquisition of the Rolls-Royce energy business shws that have a clear plan and that we are resolutely putting that into action.We are Siemens, we’re back in the game. That’s the kind of strategic and financial power we have and will continue to have.”