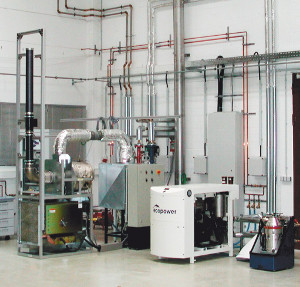 The SOFT-PACT consortium has recently completed the penultimate phase of a European demonstration project of stationary fuel cell technology with the installation of more than 25 integrated fuel cells in UK and German homes.

As deployed, the SOFT-PACT Integrated Fuel Cell (SIFC) units utilise 1.5 kW Solid Oxide Fuel Cell technology from Ceramic Fuel Cells Limited, the latest Vogue product technology taken from Ideal Boilers Limited and specialist software from HOMA Software B.V. that consolidates the heat, power and operational data from each unit.
As the fourth consortium member, E.ON Technologies Ltd manages the SOFT-PACT project, co-ordinates the installations with local installers and employs their own monitoring team to analyse and report on the SIFC data until the conclusion of the project in July 2015.

Part funded by the Fuel Cells and Hydrogen Joint Undertaking (FCH-JU), the fuel cells run on grid supplied natural gas that generates up to 36 kWh of electricity per day for each home. The heat generated by the fuel cell is fully integrated into the SIFC’s 26 kW boiler and tank system to optimise the boiler’s delivery of DHW and heating for each home.

The project will be conducted over a full year to demonstrate the efficiencies that the SIFC system can achieve across all four seasons.

Earlier phases of the SOFT-PACT project, which started in July 2011, included the deployment of 40 systems in the UK & Germany that combined Ceramic Fuel Cells’ BlueGEN fuel cell with either a separate domestic boiler and tank configuration or a combined boiler & tank unit.