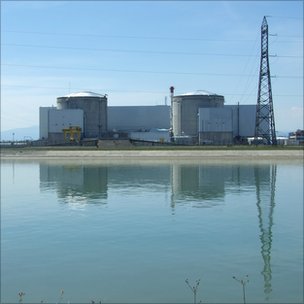 France could face winter power shortages as soon as next year due to the planned closure of two of its nuclear reactors, the nation’s grid operator has warned.

The reactors at EDF’s 1800 MW Fessenheim PWR plant in Alsace (pictured) were commissioned in 1977, making them the oldest operational nuclear reactors in France. President Franàƒ§ois Hollande has pledged to close them by the end of 2016 after a string of safety incidents between 2004 and 2012.

According to a study by TSO Reseau de Transport d’àƒâ€°lectricité (RTàƒâ€°), the nation’s supply-demand balance could be in jeopardy as soon as the winter of 2015-16. Given a period of especially cold weather such as 2012’s cold snap, the TSO predicts a shortfall of 900 MW. During the following winter RTàƒâ€° said the gap could widen to 2000 MW, narrowing to 800 MW in winter 2017-18 and achieving balance thereafter.

Dominique Maillard, RTàƒâ€°’s president, was quoted by the Bloomberg news service as saying, “It [the report] is an alert. This could hurt the French economy.” A third unit with a capacity of 1650 MW, currently under construction at EDF’s 2.6 GW Flamanville plant, is planned to come online in 2016, but it will not produce enough power to make up for the closure, he added.

RTàƒâ€° said its predicted deterioration of energy safety margins, if not offset by new production capacity or otherwise addressed, cannot “ensure security of supply in case of an intense cold comparable to February 2012”. However, Maillard said, “We have time to react.” RTàƒâ€° recommends resurrecting gas-fired power plants that have been mothballed due to falling profits, and encouraging the industrial sector to reduce its consumption during peak demand times. à‚

Hollande has said he plans to reduce nuclear power’s share in France’s energy mix, from 75 per cent at present to 50 per cent by 2025. à‚