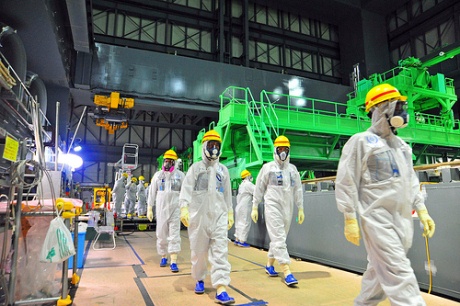 A labour shortage could be in the works for the decommissioning crew at Japan‘s Fukushima No 1 nuclear power plant, analysts have warned, potentially putting the project at risk.

According to a weekend report in the Asahi Shimbun newspaper, an official at Japan’s Agency for Natural Resources and Energy said it is “unclear to some extent whether it will be possible to secure enough labour until the decommissioning process is completed”.

Of the plant’s 14,000 registered workers, 174 have reportedly left the plant after reaching the legal limit, and 2081 have received between 50 and 100 millisieverts of exposure. Of the latter group, the Asahi Shimbun said “a majority” have been transferred to lower-exposure positions by their companies before reaching the limit, a common practice once an employee’s exposure reaches 20 millisieverts.

This leaves the coming work ” including tasks which need to be carried out within the most radioactive parts of the plant ” in doubt.

Plant operator Tokyo Electric Power Co (Tepco) said there would not be a worker shortage given that its employee numbers are more than adequate for the required tasks, but if more people continue to reach the exposure limit it “will respond to the situation by reducing the level of radiation at the plant”.

Analysts say a long-term plan is needed to keep the project going for the 30-40 years that complete decommissioning is projected to take. Shigeaki Tsunoyama, who heads the Fukushima Prefectural Government’s safety advisory group, told the Asahi Shimbun that “decommissioning will stall” if too many experienced workers hit the exposure limit and leave or are transferred. “The government and Tepco have to take some steps as early as possible,” he warned.

One area being explored by Tepco is the replacement of human workers with robots in radioactive areas of the plant. So far, the utility says it has used robots equipped with cameras to explore the damage inside the reactors. “We are expecting to apply remote techniques further to the operations,” it stated, “such as the decontamination of the high-dose radiation area inside the reactor buildings and the removal of fuel debris from the reactor contaminant vessel or the reactor pressure vessel.” à‚

Next on the agenda for Tepco is removing fuel rods from reactor 3’s spent fuel pool, which is planned to largely involve remote operations in order to limit workers’ exposure. However, some workers will be required to set up the necessary equipment. à‚