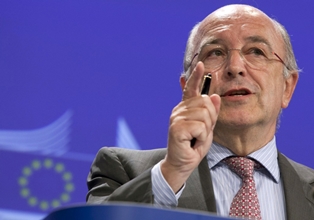 The European Commission has adopted new rules on public support for projects in the energy sector.

The guidelines aim to support member states in reaching their 2020 climate targets, while addressing the market distortions that may result from subsidies granted to renewable energy sources. To this end, the guidelines promote a gradual move to market-based support for renewable energy.

There is also content on how member states can assist energy intensive companies, exposed to international competition from charges levied for the support of renewables.

The guidelines include new provisions on aid to energy infrastructure and generation capacity to strengthen the internal energy market and ensure security of supply.

The adoption means the European Commission has remained true to the consultation document issued in December.

Commission Vice President in charge of competition policy Joaquín Almunia (pictured) said: “It is time for renewables to join the market. The new guidelines provide a framework for designing more efficient public support measures that reflect market conditions, in a gradual and pragmatic way. Europe should meet its ambitious energy and climate targets at the least possible cost for taxpayers and without undue distortions of competition in the Single Market. This will contribute to making energy more affordable for European citizens and companies.”

The new guidelines will be valid from 1 July 2014 until the end of 2020. The new rules do not cover state aid to nuclear electricity. if Member States decide to fund projects in this area, they need to notify the aid to the Commission, who will assess it case-by-case under the general Treaty state aid provisions.

A pilot phase in 2015 and 2016 will allow member states to test competitive bidding procedures in a small share of their new electricity capacity. The guidelines also foresee the gradual replacement of feed-in tariffs by feed-in premiums, which expose renewable energy sources to market signals. Small installations will benefit from a special regime and can still be supported with feed-in tariffs or equivalent forms of support. Furthermore, the rules do not affect schemes already in place that were approved under the existing rules.

The Commission recognised what it termed the high burden of supporting renewables for some energy intensive companies, in particular those exposed to strong international competition. The guidelines therefore allow reducing the burden for a limited number of energy intensive sectors defined for the whole EU.

The rules also have the aim of making it easier and quicker for public authorities to implement energy efficiency measures since they do not need to obtain prior approval by the Commission. Examples of these measures include certain forms of aid to promote of renewable energies or district heating, to clean up contaminated sites or to improve energy efficiency in buildings.

Justin Wilkes, deputy chief executive officer of the European Wind Energy Association was critical of the legislation. He said: “The Commission would have liked to put the cart before the horse, by focusing on forcing wind energy to compete in a market which still does not exist, while ignoring the obvious market distortions that need to be tackled first, such as the majority of subsidies that go to fossil fuels and nuclear.

“While we welcome the drive for long-term market integration of wind energy, state aid guidelines are not the ideal tool for the Commission to legislate on energy policy.

Member States should be flexible in implementing the guidelines, in order to enable the most cost-efficient development of wind energy in Europe, and avoid increased uncertainty for the sector,” he continued.

Meanwhile the German business industry association has expressed relief at announcements from both Berlin and Brussels in recent days – you can read about that in more depth here.