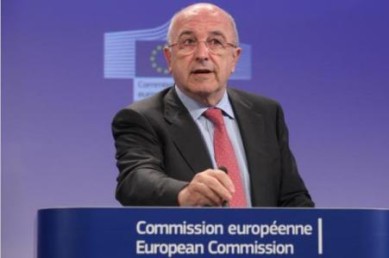 Britain’s plans to use subsidies to encourage its nuclear power programme have been upset by a decision in Brussels yesterday to avoid providing specific guidelines on permitted state subsidies.

The European Commission has decided that it will continue to investigate programmes on a case by case basis.

It means that European nuclear projects are left with less certainty when attempting to generate investment, and will be particularly felt by countries in central Europe as well as France and the UK.

The British are locked in talks with EDF on developing a key new nuclear plant in western England and is hoping various support mechanisms ease the way to a deal.
In the coming months they are to seek clearance from Brussels for their next generation of nuclear plants and the decision could make matters more difficult.

Joaquàƒ­n Almunia, the EU competition commissioner, considered extending supports available to renewables to the nuclear sector under a broader review of the regime for policing state subsidies.

However anti-nuclear campaigners and environmental groups have been highly active in preventing what it sees as an environment for nuclear investment and at Tuesday’s closed door meeting of EU commissioners, Mr Almunia opted to advise against separate guidelines, a position supported by a vast majority in the room.

“This simply means that state aid notifications by member states will continue to be assessed directly under treaty rules and the standard in this field will be determined by the commission’s case practice,” a commission spokesperson told the FT.

State aid guidelines ” along with the binding targets ” have been credited with making it more straightforward for governments in Germany, Italy and Spain, in particular, to implement a regime of subsidies and tax breaks that have helped renewable technologies to flourish across the continent.

Those subsidies have since became a source of controversy, with Europe’s biggest utilities arguing that they have distorted the continent’s energy market and contributed to higher prices for consumers and more ” not less ” carbon pollution.

Proponents of nuclear power have repeatedly argued that it should be entitled to similar treatment because it is also a “low-carbon technology” that serves the EU’s goal of reducing greenhouse gas emissions.