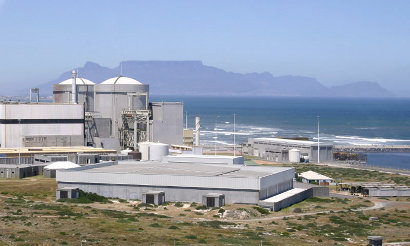 In a move described by South African newspaper Times Live as “holding off doomsday”, state utility Eskom announced this morning that it will begin stage one load shedding in an attempt to address the nation’s power shortfall and avoid more severe blackouts.

According to reports, around 22 per cent of the utility’s installed capacity of 41,995 MW was already unavailable due to maintenance and breakdowns, and rolling blackouts were implemented last week across the country. Then, on Sunday, the 930 MW unit 1 of the Koeberg nuclear power plant (pictured) was shut down due to a technical fault.

In an emailed statement, the utility said it expects the unit to be back at full capacity later this week, although it is still scheduled for a planned refuelling, inspection and maintenance outage early next week. Koeberg unit 2 is operating at full power, Eskom said.

Koeberg is the nation’s, and the African continent’s, only commercial nuclear power plant. It is “Eskom’s most reliable power station”, the utility’s website says, as well as being “vital for grid stability in the Cape”.

In a statement released this week, Eskom said that “because our system is very vulnerable, if you lose any capacity from the grid, it brings you to the edge of load shedding.” And CEO Tshediso Matona commented: “Our reserve margin is so thin that every incident creates a major systems issue.”

“Hopefully #LoadShedding will not go on to Stage 2”, the utility tweeted today.

South Africa is facing a major power crisis due to crumbling infrastructure, which some commentators fear could lead to grid collapse. The nation has experienced regular blackouts since 2008, but the cuts have increased since November. In December Eskom said the growing number and length of the blackouts was “due to unforeseen technical problems at power stations, depleted water reserves and logistical issues relating to diesel supplies at our peaking power stations.”

The government is reportedly working on a new financing plan for the power sector, expected to be revealed next month when the national budget is presented. In December the nation announced that it would hold a tender for additional nuclear power plants, aiming to add 9600 MW to its overstretched grid.