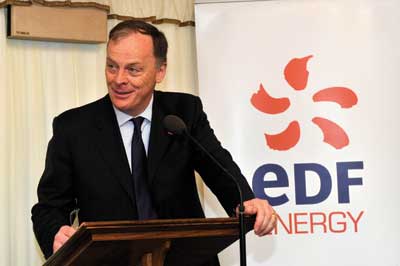 EDF’s eight nuclear power stations in the UK produced their highest output for seven years in 2012.

And the company’s UK chief executive Vincent de Rivaz said that the 60 terawatt hours achieved last year “underlines the need to move forward with plans to build the next generation of nuclear stations”.

EDF is poised to make a final investment decision on a new plant at Hinkley Point in Somerset, England. In December, the European Pressurised Reactor (EPR) planned for the site was granted approval by the UK regulator.

Last year EDF issued seven year life extensions to its nuclear plants at Hinkley Point B and Hunterston B.

Meanwhile, regulators have today been asked to assess the Advanced Boiling Water Reactor which is planned for newbuild sites in Wales and England by Hitachi, under the Horizon programme which the Japanese company bought from E.ON and RWE last year.

UK Energy Minister John Hayes said: “We must be absolutely sure that any reactor used in this country meets our rigorous safety standards. That’s why I’m asking the Office for Nuclear Regulation and the Environment Agency to conduct a thorough examination of the reactor design proposed for the Wylfa and Oldbury sites.”

He added that “Hitachi’s commitment to the UK is extremely welcome, and I am determined that we work closely with the company to deliver their planned investment”.