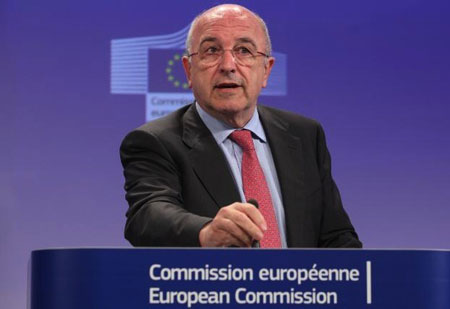 The European Commission is close to concluding that a deal between the UK government and energy firms on the country’s nuclear programme at Hinkley Point breaches EU state aid rules.

The Daily Telegraph reports its sources as saying that there is concern in Brussels over some of the terms in the deal including a £10bn loan guarantee for the construction of the plants, insurance against a meltdown, help with decommissioning costs and the inflation-linked “strike price” of £92.50 per megawatt hour for 35 years.

The commission may request that the UK revise the deal, a move that could lead to long delays and even cause the project to unravel entirely.

If Brussels under the competition directorate head Joaquin Almunia look unfavourably on the Hinkley deal, it will further delay the installation of the Britain’s first nuclear reactors since 1995, which were expected to generate 7 per cent of the country’s electricity.

Almunia’s team are expected to issue an initial verdict in January, paving the way for a broader inquiry. Any decision requires backing by the “College” of EU commissioners.

The team is looking at the broader shape of the Hinkley deal and whether state support on this scale is needed for the project to go ahead. The competition authority at EU level will make a judgment based on ordinary EU competition case law.

The Telegraph reports also that Günther Oettinger, the EU’s energy commissioner, warned last month that “35-year feed-in tariffs may be a problem”, adding that the EU might do better to invest more in wind and gas. He earlier described the UK nuclear deal as a throw-back to the “Soviet” era.

The UK government can appeal any decision at the European Court but such a move could leave the project delayed for a long time. The Department of Energy and Climate Change said it is working closely with Brussels to ensure that the deal does not breach state aid rules.