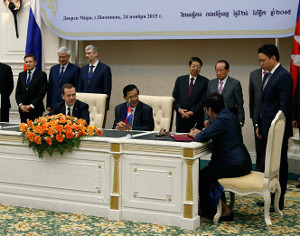 Cambodia has signed a memorandum of understanding with Russia to develop the capacity to build a nuclear power plant. à‚

Although Cambodian energy officials did not comment on the agreement, the head of Russia’s nuclear company Rosatom, Sergei Kirienko, said: “The Cambodian government is mulling, in future, a nuclear power station construction”.

However, a power plant could be a ways off. “Perhaps it is better to begin with a research reactor and a research centre in Cambodia,” Kirienko said. A statement on Rosatom’s website explained that Russia will help engineer, build and operate such a centre, which could feature multiple test reactors.

Russia will provide expertise, research and training under the terms of the agreement, which was signed this week during Russian Prime Minister Dmitry Medvedev’s visit to Phnom Penh.

Although Cambodian Prime Minister Hun Sen has previously rejected the idea of pursuing nuclear power in the country, there have been repeated calls to consider it from within the government.

The nation is currently heavily dependent on imported power from neighbouring Vietnam and Thailand.