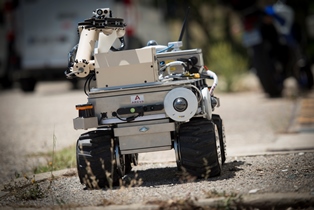 Areva has delivered to the French Atomic Energy Commission the first in a new generation of robots designed to be used in nuclear power plants.

Called RIANA (Robot for Investigations and Assessments of Nuclear Areas), the robot is capable of operating in radioactive areas to map, take samples or to measure radioactivity.

Areva calls RIANA the “Swiss army knife of nuclear robotics”. It is a motorized platform with interchangeable measurement or sampling modules that can be adapted to any operational situation.

Available with four-wheel or caterpillar track drives, it is also equipped with 3D and thermal cameras to reconstitute its environment in real time. It also has on-board laser detectors to negotiate its way around obstacles and position itself precisely within a confined space.

RIANA’s Human-Machine Interface is based on a technology which facilitates in-zone interventions and Areva says its work “can be executed without necessarily requiring the presence of an operator – an optional guidance program allows the robot to find its own way and to work on a site autonomously”.

In the event of a signal loss, RIANA is automatically guided back towards its last known location, whether being teleguided by an operator or operating autonomously.

Areva says that RIANA’s features make it an ideal tool for supporting nuclear dismantling operations, particularly in areas where operator presence is restricted or prohibited.

Areva said that the French Atomic Energy Commission has already placed an order for a second model equipped with additional functionalities and other added that nuclear operators have also expressed an interest in the technology.

Thierry Varet, technical director of Areva’s Dismantling & Services said: “RIANA provides a new range of services for interventions in sensitive nuclear areas, within confined spaces or those affected by accidents, both in day-to-day and emergency situations.”