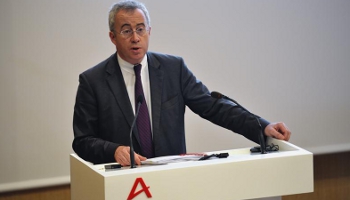 The chief executive of Areva has stepped down ahead of a management reorganisation at the nuclear group.

Luc Oursel has been at the helm since 2011 but has taken the decision, citing a health condition. He said he had “no choice but to hand over my responsibilities at the head of the company and have chosen to take a leave of absence in order to pursue treatment”.

Areva has struggled to cope with the changed circumstances for nuclear power post-Fukushima with notable difficulties for the group in Finland and West Africa.

Earlier this year the French group reported a first-half loss, dropped a target to sell 10 nuclear reactors by 2016 and exited its solar business. It pledged cost cuts to avoid a ratings downgrade, but shares are still down 44 per cent this year.

Mr Oursel’s contract was already due for renewal at the end of this month, with the government adopting a new management structure for Areva. Sources close to the situation said he may not have survived the reorganisation, according to Bloomberg.