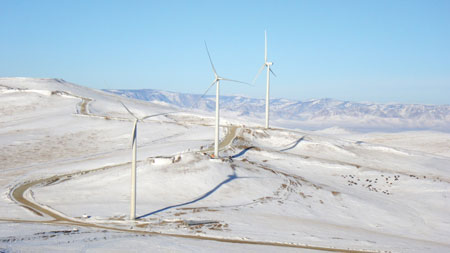 Mongolia has a staggering 1100 GW of potential wind power capacity, but financing and building projects is problematic. Drawing on their experience working on the country’s only operational wind farm, Caedmon Shayer and Iban Vendrell identify some of the issues and propose approaches to developing bankable projects that can unlock the country’s wind potential.

Due to industry expectations of significant growth in the domestic mining sector, the government of Mongolia expects its total current power demand of approximately 1 GW to almost double by 2020. According to the 2015 Mongolia Energy Master Plan, around 20-25 per cent of the total power supply is expected to come from renewable energy sources, with onshore wind being an important contributor.

The development of a newly-liberalized renewable power market sector, along with the introduction of governmental financial support mechanisms, makes this market particularly attractive for international investment.

The US National Renewable Energy Laboratory (NREL) has found that Mongolia has enormous wind power potential, with good wind resource identified in the east and isolated Gobi desert area of the south.

According to NREL, if all windy areas in the country were developed a staggering 1100 GW of capacity could be realized.

Mott MacDonald has been involved in Mongolia’s wind power sector since December 2011 when it was named lender’s technical advisor on Salkhit, the country’s first commercial wind power project and the only operating wind farm in Mongolia to date. Since then, the consultancy has provided services for other wind farms currently under development. Drawing from the lessons learned working with a number of international companies looking to invest and develop wind power projects in Mongolia, particular country specific challenges have been identified.

With harsh winters and one of the world’s most sparsely distributed populations, Mongolia faces considerable challenges to provide sufficient heat and electricity for its people, especially in rural areas.

Its capital, Ulaanbaatar, is also the country’s largest municipality and is home to over one million people, comprising 45 per cent of the total national population.

Most of the electricity and heat consumption in Mongolia occurs in the Central Energy System (CES), one of four relatively small, independent transmission grids.

Currently, the largest power suppliers in the country are aging coal-fired plants providing electricity and, in most cases, district heat in combined heat and power (CHP) mode via central networks. The CES is supported by the Russian grid in frequency and load. Maximum import is limited to 100 MW, although night peak during winter can be increased to 180 MW. No interconnection for inter-country operational power export appears to exist between Mongolia and China.

It is expected that mining developments will see major power demand growth in Mongolia, especially in the South Gobi region where the majority of existing and future mines are likely to be located. New power generation to supply such load is required to maintain future industrial zones, which could potentially include further wind projects.

In South Gobi, private developers are currently working on six coal-fired power plants and a number of wind farms which are mostly in the feasibility stage.

There are a number of challenges facing the Mongolian grid. These include misalignment between rapid gross domestic product growth – 9.5 per cent in 2014 according to the Asian Development Bank – and power capacity development, the low efficiency of existing aging coal plants that need investment and rehabilitation, high losses in transmission and distribution networks due to long lines to low demand centers with low density populations, and limited grid interconnection among the four grids and other neighbouring countries.

Additionally, due to extreme cold in winter, the value of heat from CHP stations is much higher than in other jurisdictions, presenting challenges for developers of electricity-only generators. Other regulatory, economic, managerial and financial barriers also exist.

Mongolia is a relatively small country in GDP terms, and is still developing. The country’s construction industry was state-controlled until 1990 and, while there are now over 3000 construction companies in Mongolia, large international contractors have a limited presence. The power sector was deregulated and privatized in 2001; however, Salkhit, the single operating wind farm and first independent power project, only started producing power in 2013.

The relatively small size and experience of the construction industry, the limited experience of all institutions in developing, constructing and operating power projects, as well as the challenge of balancing a decentralized grid have led to skill shortages throughout the supply chain. Capacity building throughout the Mongolian power sector may be necessary to achieve substantial sector growth.

Given the relatively low current power demand and poor in-country grid interconnection, insufficient load demand and/or baseload supply may limit the amount of wind power that can be connected to the grid. In the South Gobi, wind projects’ viability may be contingent on:

• A combination of additional mining demand coming into place within a short time frame (which in itself depends on a number of political and economic factors);

• Implementation of wider grid inter-connection plans within Mongolia and to Russia and China to provide further grid flexibility.

New wind farm developers should evaluate electricity demand requirements in the context of existing and potential future demand for electricity, along with the need to operate CHP plants during wintertime to cover heating demands.

The transmission system in Mongolia is currently being reinforced to improve poor grid connectivity between the south and north areas of CES. The grid owner’s Power Grid Master Plan includes a planned 220 kV network that completely connects Russia, Mongolia and China, allowing power interchange among these countries. This interconnecting plan will play an important role for the Mongolian grid to increase system reliability and security and for wind farms to be able to export their full range of power. There is, however, uncertainty as to when these works will be completed.

Wind turbine generators (WTG) and other major equipment such as transformers are expected to be transported from countries such as China, Japan or India via Tianjin Port. There are a number of entrance points to Mongolia from China, however the crossing with the highest-quality roads is at Erenhot. There have been a number of wind farms built just across the border in Inner Mongolia, which serve to demonstrate the viability of transportation routes through China.

With respect to road links within Mongolia, a key challenge is the limited extent of paved roads in the country. For example, only a third of the approximately 750 km journey from the Erenhot border crossing to Ulaanbaatar is made up of paved roads, while roads in the south are poorly defined and difficult to use due to soft sands and steeply sloping areas.

Additionally, regular maintenance of road conditions throughout the transportation period, and potentially into operation, is required as roads are sensitive to short-lived rainfall and snowmelt during the spring. Adding to the challenges, sandstorms can occur relatively frequently in spring and summer leading to delays and health and safety risks.

Despite the challenges, abnormal loads and construction traffic have been seen to successfully use dirt roads, once improved, in similar terrain in Mongolia and Inner Mongolia. In addition to the design and maintenance aspects outlined above, successful transport will also require an experienced abnormal load transport contractor with appropriate equipment.

Climate conditions in Mongolia are extreme. During winter, temperatures of -20°C in the day and -40°C at night are relatively typical and temperatures can fall below zero during the night anytime outside of May to September.

Due to this, it should be assumed that major construction activities are not possible between the end of November and beginning of April, and schedules should be designed accordingly. Additionally, construction sites need to be left in an appropriate state to survive the winter, with on-site components protected effectively. Because of the significant season-related considerations, project completion time frames are likely to be longer in Mongolia than in less extreme climates.

In addition to the climate, the transport and skill issues discussed above may impact on the timescale for completing activities in comparison with international norms.

Developers often prefer to construct infrastructure projects under engineering, procurement and construction (EPC) contracts, as these pass the majority of construction risk to a single contractor. For project finance and especially in undeveloped markets such as Mongolia, fixed price wrap-up agreements would be commonly preferred over cost-plus or other price sharing arrangements.

However, sourcing an EPC contractor may be difficult as there are a limited number of international contractors with a presence in Mongolia. Additionally, WTG manufacturers tend to focus on their core activity of WTG supply while construction contractors may not wish to take on overall project risk when the largest proportion of the contract value falls to the WTG manufacturers. It may therefore be commercially beneficial to use a multi-contract structure; however, to achieve acceptable outturn costs strong interface management procedures will need to be developed.

A particular challenge in Mongolia is the lack of an in-country crane available to lift large (over 2 MW) WTG components. A crane may need to be sourced on a temporary basis internationally, likely from China, by the relevant contractor. Specific attention will also need to be given to the availability of cranes during the operation of the wind project in case of major maintenance works requiring a heavy lift.

Finally, we have noted that in Asia it can be challenging to obtain operations and maintenance (O&M) services from parties other than WTG suppliers. Therefore, during the selection of the supplier, developers will need to consider the potential necessity for provision of O&M services and spare parts over the long term.

• All parties, from government and investors to the Mongolian wind and construction industries, should implement structures to attract highly skilled staff and build capacity in the country;

• As contractor(s) will have to rely on local subcontractors in certain areas, it is crucial to obtain sufficient highly skilled management staff to provide a robust focus on quality control and health and safety;

• Timescales for the completion of new transmission lines currently under development should confirmed by the local authorities as the delivery of these lines will be required for the commercial operation of wind projects in South Gobi;

• Conservative schedules should be proposed which are robust in the event of delays;

• In the event of delays the site should be able to be demobilized over the winter period without any risk to equipment left on-site;

• A developer needs to perform its own market engagement through pre-qualification assessments to understand what contractual arrangements are likely to be available in the market;

• If a multi-contract approach is the only valid option, robust interface risk management will be required;

• The availability of cranes for major maintenance should be a focus and it should be decided whether this equipment should be sourced from the market or via a formal arrangement with a particular supplier;

• Long-term spare parts provision should be assured contractually and either a long-term O&M agreement signed or a robust plan to train in-country technicians implemented.