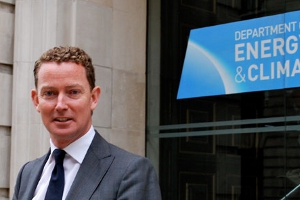 Minister for energy and climate change, Greg Barker, told Conservative Party conference in Manchester, England this week that he wants to encourage a “decentralised power to the people energy revolution” made up of households and businesses producing their own energy.

The minister says that through stimulating decentralised power the taxpayer has the opportunity to counter the dominance of the Big Six energy suppliers, and cut down significantly on household energy bills.

There are already more than half a million local energy systems installed in homes and businesses throughout the country and Barker told the audience, “I want to unleash a completely new model of competition and enterprise. I want to encourage a vast new army of disruptive new energy players to challenge the Big Six.”

“From individual consumers to community groups, entrepreneurs, SMEs and FTSE giants, I want them all to consider generating their own energy at real scale, as well as starting to sell their excess energy on a commercial basis. A decentralised power to the people energy revolution – not just a few exemplars but tens of thousands of them. The Big Six need to become the Big 60,000.”

Barker used the occasion to proclaim the virtues of solar energy technology, which today accounts for around 2.5 GW of installed capacity in Britain. He insisted the failing costs of solar, as well as technologies such as combined heat and power, geothermal, biomass, energy from waste and hydro power, were driving jobs and growth.

“We have put pressure on renewables to cut costs, scale up faster, commercialise sooner, and emerge as a genuine commercial challenger to the traditional fossil fuel economy,” he said. “And now with falling costs there are a whole range of locally deployable renewable technologies that can be exploited economically.”

Mr Barker added “We must also look to do far more to integrate our new policies that help families produce their own renewable electricity with our new incentives to help families generate renewable heat, and make sure they work hand in glove with the range of new Green Deal energy efficiency measures which help hardworking families keep their homes warmer for less.”