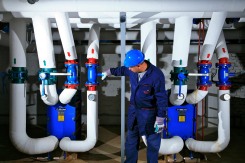 The UK government is to publish its Heat Policy in the coming weeks and the country’s district heating authorities want the government to take the opportunity to provide clarity and support for investment to be facilitated.

The sector is hoping to play a significant part in the country’s new community energy infrastructure, and is proposing as much as $456m (à‚£300m) in investment.

In a press release the UK Combined Heat and Power Association said local authorities, community representatives and industry developers spoke in support of a coordinated plan of action that will see district heat operate alongside gas and electricity networks as the UK’s newest energy utility.

“We have seen in London the impact that a focussed approach to district heating can bring. Rolled out across the country we can expect this approach, along with schemes such as the Energy Company Obligation, to stimulate investment of more than à‚£300 million in community energy infrastructure over the next few years.”

“There is no question that the United Kingdom could be Europe’s fastest growing district heating market within the next few years, and right now we have the opportunity to lay some solid foundations for that growth. The Government’s Heat Policy will be an important part of that, but the industry needs to raise its game as well.

Ian Manders, Head of the Association’s District Heating & Cooling Group, spelled out the steps that the industry is taking to move district heating to the next level in the UK:

“We have been delighted with the progress that has been made in such a short time. Last year’s Heat Strategy brought district heating in from the cold and is now set to become a core strand of the nation’s future heat policy. In Scotland, new funds have been made available and district heating is being increasingly integrated across policy. But we are under no illusions of the challenges that lie ahead, and the business of building a new energy utility needs to start here.

“That is why we prepared the ‘Big Offer’ as a set of practical proposals that will help to build a pipeline of viable district heating projects in cities, towns and communities across the country. We certainly hope that many of these proposals will be adopted by the Westminster and Holyrood governments. But we are also playing our part as an industry, working to build the vital confidence of consumers, investors and developers through new approaches to consumer protection. We have to earn the right to become a part of mainstream energy supply.”

The CHPA is presently working closely with its members and industry stakeholders to introduce robust arrangements to protect the interests of consumers connected to new district heating schemes.