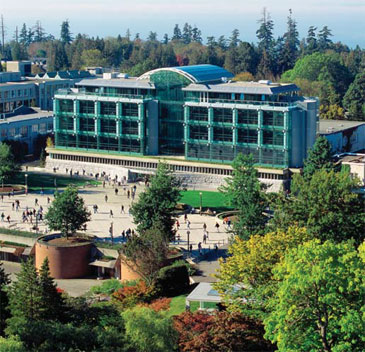 The Bioenergy Research & Demonstration Facility on the Vancouver campus of the University of British Columbia (UBC) in Canada is the first demonstration of its kind in the world of a community-scale combined heat and power (CHP) system fuelled by biomass.

This is no mean feat as UBC contains a community of some 50,000 students, staff, faculty and residence, with over 400 buildings, occupying a site of 400 hectares.

The Bioenergy Research & Demonstration Facility is responding to the challenge of keeping energy costs down in an environmentally friendly way while demonstrating a small-scale power production that is relevant and replicable in other communities.

The system, fueled by biomass, produces synthesis (syn) gas in a high-temperature, low-oxygen atmosphere reactor. The syngas is burned in raw form in a boiler to produce steam and can also be conditioned to create an ultraclean syn gas that is injected into an internal combustion engine used to generate electricity.

The system provides both heat and power to UBC’s Vancouver campus. It also facilitates research to optimize the generation of feedstock (fuel) and process innovations, and has set new global standards for performance and emissions by substantially decreasing the campus’s greenhouse gas emissions (GHGs) and fossil fuel consumption.

The Bioenergy Research & Demonstration Facility is a partnership between UBC and two of the world’s leading developers of green technology – Vancouver-based Nexterra Systems Corporation and GE Energy.

UBC and GE Power and Water, the subsidiary of GE Energy involved in the project, are members of the International District Energy Association (IDEA).

The facility is a “Campus as a Living Laboratory” project integrating UBC’s core academic mandate (research and teaching) with the University’s infrastructure and business operations.