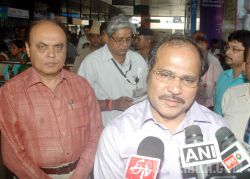 The Indian minister of state for railways laid the foundation stone for an on-site solar power plant at Guragon railway station on Thursday.

Minister Adhir Ranjan Chaudhary’s symbolic action marked the start of the construction of the 25 KW solar power plant being undertaken under RITES’ CSR and Sustainability Projects.

In a first, the solar power plant will be set up on the platform’s roof where the panels will be placed and solar electricity generated, an official said.

Minister Chaudhary said of 365 days, India gets full sun for almost 300 days but the vast resource of solar energy potential remains unutilised. He added that by utilising the platform roof, there is no issue of land acquisition and passengers can also get shelter from rain and sun while the aesthetics of the station will improve.

The New Indian Express reports that the project, even if small, holds large potential and railways will pursue similar initiatives either under corporate social responsibilities of its public sector undertakings or on railways’ own initiative.

RITES chairman and managing director Rajeev Mehrotra said, “If replicated on a larger scale, it could help in reducing the Indian Railways’ carbon footprint and achieving the target of sourcing at least 10 per cent of energy from renewable sources like solar power and biomass.”

The plant is being installed with the assistance of BHEL electronics division, Bangalore and is fully funded by RITES.