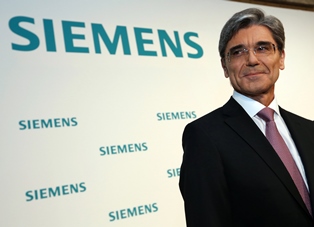 The performance of Siemens traditionally strong power generation division, together with its health care unit, has been cited for the overall disappointing profit statement released this week.

Profit at the two units fell a combined 27 per cent, dragging overall first-quarter profit down 4.1 percent to 1.8 billion euros ($2 billion).

“Power and gas will need a more comprehensive concept to return to historical margins longer term,” said Chief Executive Joe Kaeser who also announced management changes at the Munich-headquartered multinational.
Purchases last year of Rolls-Royce Holdings Plc’s energy unit and oil-and-gas equipment maker Dresser-Rand Inc. for a combined 6.8 billion euros are now under the microscope, as they have yet to make the impact expected. Both deals were intended to boost Siemens’ offering for the extraction of shale gas through hydraulic fracturing, or fracking.

“No other business in the company has such a pronounced need for action,” Kaeser said of the power and gas unit today. “This is partly because we didn’t adequately recognize the signs of the times, such as rising price pressure and overcapacities.”

Bloomberg reports that the board changes will also see Roland Fischer, head of power and gas, leave to be replaced on an interim basis by energy head Lisa Davis. Siemens is already cutting 1,200 jobs from the division.