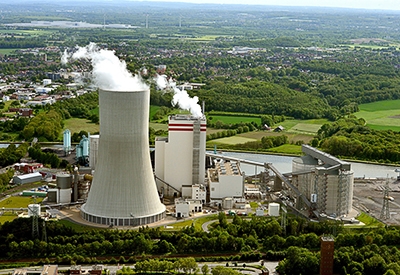 A 750-MW combined heat and power plant that supplies district heating for the town of Làƒ¼nen, Germany has been commissioned.à‚ à‚

The hard coal-fired steam plant was built by Siemens Energy and Japanese manufacturer IHI Corporation. It features a SST5-6000 steam turbine and a model SGen5-3000W generator.

Located on the Datteln-Hamm Canal, a major inland waterway in northwest Germany, the plant provides steam for district heating as well as electricity for 1.5 million Làƒ¼nen households. It is predicted to operate for 7000 full-load hours in 2014.

Siemens said the plant is the cleanest and most efficient hard coal-fired plant in Europe, with an electrical efficiency of almost 46% and carbon savings of up to 1 million tonnes per year.

‘Despite difficulties arising from the special licensing situation for coal-fired power plants in Germany, we have managed to build a plant to the highest technical standards,’ said Rainer Hauenschild, CEO of Siemens Energy Solutions.