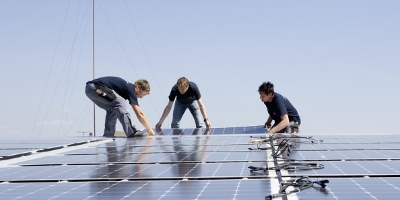 A Germany-based solar service provider has announced the completion of Europe’s largest crystalline rooftop solar plant, and are keen to reap the rewards of generating their own on-site electricity.

Wirsol has put online a large solar roof plant with a peak capacity of 8.1 MW at the distribution center of the pfenning logistics GmbH in Heddesheim near Mannheim, Germany.

The roofs of the two hall complexes have a total area of eleven hectares.

“We are happy that we can now partially generate our electricity by ourselves,” says Karl-Martin Pfenning, owner and managing partner of the
pfenning group.

“With the photovoltaic installation, we can annually save up to 5,171 tons of carbon. Over 33,000 modules on the roof, which are angled in east-west orientation, produce as much clean
power to potentially cover the demand of about 1,846 families. Thus, the solar power plant is the largest own consumption plant in Europe so far.

For energy-intensive companies In particular, the use of self-produced sun power means substantial cost savings and short amortization periods.à‚