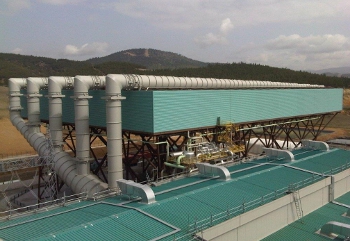 As part of a 255 MW expansion, a cogeneration power plant in Abidjan, Ivory Coast is set to receive a 120 MW air-cooled condenser and 18 fan units from German firm GEA Heat Exchangers.

The 321 MW natural gas-fired plant is owned and operated by the Ivorian Electricity Production Company (CIPREL). Its three-phase expansion, during which it will also receive five GE gas turbines, is financed by the World Bank and is scheduled to be completed in 2015. A planned further expansion phase is set to switch to combined-cycle turbines, bringing the plant’s capacity to 543 MW.

The expanded power plant will be the largest on the Ivory Coast.