Analysts praised the deal as a good one for Dynegy. After it was reported late Friday, Fitch put Dynegy on ratings watch negative, indicating the credit rating agency could affirm or lower the rating.

In a shocking turnaround for the one-time Wall Street darling, the Enron name will disappear and the new combined company will be called Dynegy Inc. Chuck Watson, CEO, will head up the new company as CEO and chairman.

“It’s amazing,” said John Olson, an analyst with Sanders Morris Mundy in Houston. “Dynegy is getting itself a wonderful deal.” He estimated Dynegy is buying Enron at about six times earnings or at about 30-40� on the dollar.

With one exception, Ken Lay, CEO, and other senior executives at Enron won’t be retained in operating capacities at the combined company. Greg Whalley, Enron’s chief operating officer, will become an executive vice-president.

Terms of the transaction call for Dynegy to swap 0.2685/share for each Enron share. The transaction would value Enron at about $10.41/share, a nearly 21% premium over Enron closing share price Friday of $8.63. Merrill Lynch & Co. energy analyst Donato Eassey said he was “extremely encouraged” because the formula doesn’t include a collar.

The proposal will add a “tremendous amount of value” to Dynegy, he said. It will combine Enron core businesses which were “functioning extremely well” with Dynegy’s “much more conservative” management philosophy, Eassey said. Eassey said he was projecting earnings of a little more than $3 from the transaction and was pleased to hear the company is projecting earnings of $3.40-$3.50/share in 2002. But he cautioned Dynegy will have to execute.

Key to the merger is the participation of Dynegy’s partner ChevronTexaco Corp., which will give Enron an immediate cash infusion of $1.5 billion to stabilize the trading operation, Watson said. ChevronTexaco owns a 26.5 % stake in Dynegy.

At closing, ChevronTexaco will invest an additional $1 billion in equity into the new company. The major oil company also has the right to purchase an additional $1.5 billion in Dynegy common stock for up to 3 years after the merger is completed.

Watson said the combination of the two companies was an “easy” thing to do. We know each other well. We have exchanged employees over the last 20 years. We have been partners and competitors,” he said. “It was easy to do the due diligence.”

End of ‘asset light’
The company will pursue an “asset backed” strategy, a complete about-face for Enron, which had touted an “asset light” approach for the last several years. Lay admitted Enron’s liquidity crisis was hurting the trading operation, forcing him to discuss a merger.

The new Dynegy will be a true elephant of the industry. Revenue is expected to exceed $200 billion and it will have assets worth $90 billion. Together, the companies had gas sales of 40 bcfd and power sales totaling 500 million Mw-hr through the third quarter of 2001. Watson said he was particularly thrilled to get 25,000 miles of interstate pipeline that Enron contributes to Dynegy’s arsenal of hard assets.

In its credit rating analysis Friday, Fitch said the action reflected some uncertainty over the ultimate outcome of the company’s post-merger credit profile. While the proposed transaction won’t require Dynegy to ante up incremental debt financing, the company is likely to assume many of the difficulties which continue to plague Enron, including the need to sell underperforming emerging market assets, the ongoing government investigation of certain off-balance sheet partnerships, and potential litigation from shareholder lawsuits filed against Enron, Fitch said.

The rating agency cited as positive terms of the transaction that allow Dynegy to terminate the deal in the event of specific adverse material changes, including Enron litigation exposure in excess of specified levels or a drop in Enron’s senior unsecured credit rating below investment grade.

The companies had little to say about the cloud hanging over Enron concerning the investigation by the Securities and Exchange Commission into the off-balance sheet transactions. These special entities were at the core of the unraveling of the huge company that has been considered the market leader in wholesale energy trading for years.

Steve Bergstrom, president of Dynegy and also president of the new combined company, said the company is aware of Enron’s related-party transactions. “We believe Enron has begun to address these issues in a responsible manner and that they will not detract from the value of Enron’s core business,” he said. Neither Watson or Lay answered questions about the investigation or the controversial transactions.

“We took all that into consideration in the valuation for this deal,” said Watson. The deal, expected to be completed in 6-9 months, is subject to customary federal and state regulatory approvals. Watson said he didn’t expect any significant hurdles in getting the merger approved and no assets would have to be sold with the exception of those already reported by Enron. 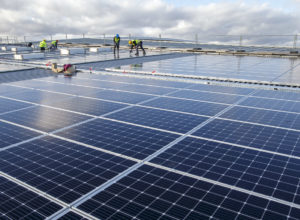