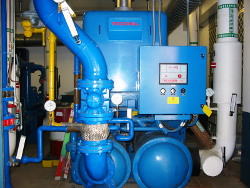 Dr. John Hatsopoulos, Tecogen’s CEO, said a weak market due to the US government shutdown meant the time was not right for an IPO.

The company had planned to raise $20m by offering three million shares at between $5.50 and $7.50 per share, resulting in a market value of around $113mn. But instead of the expected share price, Hatsopoulos said, Tecogen received bids of just $4 per share. “Investors felt they could bid lower because the market is weak,” he said.

“We’re in a very strong period of business, with record backlogs and new technology, so we didn’t accept it,” he said. Tecogen now plans its IPO for 2014.

Founded in 2000, Tecogen sells and services natural gas-powered cogeneration units, chillers and high-efficiency water heaters. According to NASDAQ, the company booked $15 million in sales between June 2012 and June 2013.

The day before the planned offering, Tecogen was granted a patent for a system that dramatically reduces CO and NOx emissions from natural gas engines, bringing them to near zero, Hatsopoulos said.