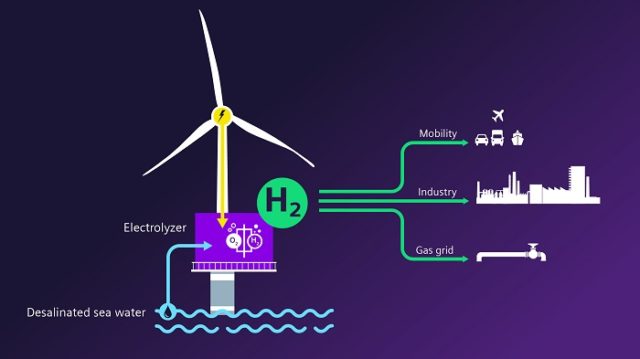 Siemens Gamesa and Siemens Energy have today announced plans to invest €120m ($146m) in a five-year strategy to unlock the potential of harvesting green hydrogen from offshore windpower.

The companies are collaborating on a solution to integrate an electrolyzer into an offshore wind turbine as a single synchronized system to directly produce green hydrogen.

Over the next five years, Siemens Gamesa will invest €80m and Siemens Energy €40m in the initiative, with a view to unveiling a full-scale offshore demonstration by 2025/26.

“Our wind turbines play a huge role in the decarbonization of the global energy system, and the potential of wind to hydrogen means that we can do this for hard-to-abate industries too.”

Siemens Energy chief executive Christian Bruch said that the two companies “are in a unique position to develop this game-changing solution”.

“We are the company that can leverage its highly flexible electrolyzer technology and create and redefine the future of sustainable offshore energy production.

“With these developments, the potential of regions with abundant offshore wind will become accessible for the hydrogen economy. It is a prime example of enabling us to store and transport wind energy, thus reducing the carbon footprint of economy.”

Together, both companies say these measures will “create a new competitive benchmark for green hydrogen”.

The companies believe the solution will lower the cost of hydrogen by being able to run off grid, opening up more and better wind sites.