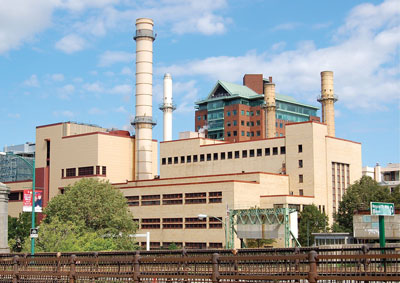 The US cities of Boston and Cambridge, Massachusetts have inaugurated a joint district energy network.

The US$112 million ‘Green Steam’ projectà‚  includes a 30-mile (48-km) pipe network that will serve 250 business district and biotechnology corridor customers, including 14 high-rise buildings, with steam from the 256 MW natural gas-fired Kendall combined heat and power station in Cambridge.

The company estimates that the network will cut the cities’ carbon dioxide emissions by 475,000 tonnes and reduce non-transport carbon emissions for both cities by 6%.

Boston’s mayor, Martin Walsh, said, ‘Veolia has been a strong and loyal partner with the city and the completion of this project marks an important step forward in attaining our Greenovate Boston goal of reducing Boston’s greenhouse gas emissions 25% by 2020 and 80% à‚ by 2050.’

‘I applaud Veolia and their partners for this investment, which is a win-win for both the environment and the economy,’ à‚ said Cambridge’s mayor, David Maher.