UN warns on threat of power generation to water supplies 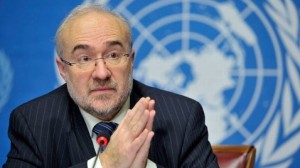 The United Nations has produced a report which highlights the threat posed by power generation to the world’s freshwater supplies.

“There is an increasing potential for serious conflict between power generation, other water users and environmental considerations,” said the UN World Water Development Report that focused on water and energy. Ninety percent of power generation is “water-intensive,” it said.
The energy industry “needs to understand that if they don’t take water into account, they will have problems,” Michel Jarraud, who heads the UN-Water agency, told Reuters. “Water supply is already a constraint for energy projects in some countries, especially in Asia.”

The report urged energy companies to do more to limit their use of water in everything from cooling coal-fired and gas-fired power plants to irrigation for crops grown to produce biofuels.

All energy production uses water, often as a coolant, the report said. The least amount of water is used in wind and solar power, while heavy users include hydraulic fracking to produce shale gas or the extraction of oil from tar sands.

The report said that hydropower dams are sometimes built with little thought for other water users, and it urged caution about biofuels, partly because of water use required for irrigation.

Energy production will increasingly strain water resources in the coming decades even as more than 1 billion of the planet’s 7 billion people already lack access to both, according to a United Nations report.

A recent report shows that the EU can gain much from choosing wind power to drive the continent’s future power generation, as it has much less reliance on water in its processes.

Water-related needs for energy production have tripled since 1995, according to GE Water, while more than half of the global cotton production is grown in areas with high water risks. Electricity demand is forecast to rise at least two-thirds by 2035, driven by population growth.

Infrastructure upgrades, smart meters and clean technologies would help conserve resources as “billions of gallons of water are leaked each day, and energy is required to clean and transport that water,” said Sensus, a U.S. developer of water-metering systems. “When water is wasted, so is energy.”

Water “is critical for energy. About 80 percent of the water used in industry goes to thermal power plants. That means the rest of industry consumes practically nothing,” said N.K. Ranganath, managing director of the India business of Grundfos AS, a Danish maker of water-pumping equipment. “As long as you’re producing thermal power, you require water. There’s no technology that replaces water in thermal power.”

Globally, as water demand increases, more than 40 percent of the population is expected to be living in areas of “severe water stress” by about 2050.