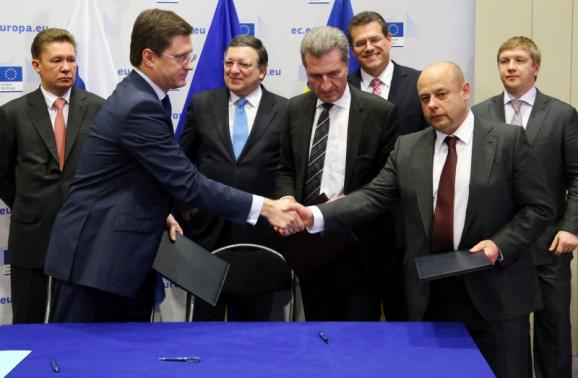 The European Union has helped broker an agreement between Russia and Ukraine, which means the continent will not be deprived of Russian gas this winter.

After months of talks, officials reached an agreement late on Thursday to resume Russian deliveries of natural gas to prevent shortages.

Ukraine needed to pay Russia for gas it has already consumed, and on the terms for future deliveries. Alexander Novak, the Russian energy minister, flew to Brussels for a signing with Yuri Prodan, his Ukrainian counterpart yesterday, which finalised the terms of the deal.
There is “no reason for people in Europe to stay cold this winter,” José Manuel Barroso, the president of the European Commission, said at a news conference. Ukraine and Russia should “act as reliable partners,” he said.

The main concern for the European Union was its reliance on the shipment of gas through Ukraine for about one-fifth of its supplies. Gazprom, Russia’s natural gas giant, shut the taps in 2006 and 2009 because of disputes with Ukraine, leaving many homes in Central and Eastern Europe without heat and forcing rationing for industrial customers.

The impact of the agreement has been felt in the wholesale power price market.

“The NBP gas contracts for delivery over November, December, January and Q1 ’15 all lost  more than 1p/therm day on day with the impact of the Russia-Ukraine gas talks.

The November fall is greatest at 1.40 p/th to 52.975 p/th – this is the largest day on day loss on a front-month contract in two months according to ICIS data (we last saw a larger drop on 2 September 2014).