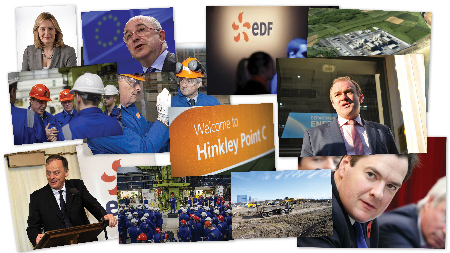 Justine Bowden, national secretary for energy at energy and construction workers’ union GMB, said the union was “delighted that the first of the badly needed fleet of new nuclear power stations will finally begin construction. This is the right decision for the country,” she said, “and the government is right to ignore the begrudgers and naysayers.”

Phil Whitehurst, GMB’s national officer for construction, added: “After all the delays and procrastination we have finally got there. Not only will the £18bn Hinkley Point C project provide 7 per cent of the UK’s energy needs and create at least 25,000 jobs during its construction and another 900 during operation, but 65 per cent of the project’s construction value will be placed with the UK supply chain.

“This project is vital to kick start the UK economy post-Brexit and will now show the world that UK PLC is open for business and ready for the challenges to come.”

And Kevin Coyne, national officer for energy at the Unite trade union, said his members were “shovel ready and dead keen to start work on the country’s first nuclear power station for a generation.

“It is excellent news that that the uncertainty caused by [Prime Minister] Theresa May’s decision to put Hinkley Point ‘on hold’ has now been dispelled and that the government recognizes the role of nuclear in a mixed energy economy,” he added.

“The good news we’ve all been waiting for”

Josh Hardie, deputy director-general of the Confederation of British Industry (CBI), said: “The final green light for Hinkley Point is good news for the UK’s energy future as well as supporting jobs and growth across the South West and the country. New nuclear energy will play an important role in supporting a diverse, low-carbon and secure energy supply, so it’s now time to push on with this key project.”

And he added that “investors are hungry for further signs from the government that the UK is open for business. Pressing ahead with major infrastructure decisions would give a real boost to their confidence in the UK in the long run.”

Ian Maclean, UK managing director for energy and industry at engineering firm WSP Parsons Brinckerhoff, called the decision “the good news we’ve all been waiting for”.

“After years of delays we can now look positively to the future, prepare our business and recruitment plans accordingly, and start filling the growing gap in our energy mix,” he said. But he warned that “whilst this is a huge step forward in decarbonizing our energy supply, we shouldn’t ignore the widespread public demand for renewables, as recent polls have suggested. Hopefully this is a sign that the government intends to create a business climate that will encourage investors and developers alike to forge ahead with a new fleet of power plant that includes a mix of both renewable energy and nuclear power, as well as gas-fired power plants to provide cleaner and safer energy to UK plc.”

This concern was echoed by Dr Jenifer Baxter, head of energy and environment at the Institution of Mechanical Engineers (IMechE), who said the announcement “is welcome and great news for the nuclear sector. However, it is important to note that this is not the end but merely a small step at the start of securing our low carbon energy requirements for the future.

“The development of Hinkley Point C provides an opportunity for the government, in collaboration with National Grid and groups like IMechE and the Energy Systems Catapult, to fully understand the likely future capacity gap and identify generation needs, types and emerging technologies that can potentially bridge this gap.

“It is now more important than ever to focus on attracting business and foreign investment to our nation following the Brexit vote,” she added.

“Nuclear has a crucial role to play”

On the analysis side, Tony Ward, EY’s head of power and utilities, called the decision “a hugely welcome validation of the work that previous governments, developers and the UK’s wider supply chain and workforce have put in to ensure the robustness and deliverability of the proposals for new nuclear build”, adding that “after ten years of preparation and deliberation, it is now time to deliver”.

“While technologies such as solar, wind and batteries will also be hugely important in delivering the UK’s future energy mix, new nuclear, starting with Hinkley Point, has a crucial role to play in displacing our reliance on fossil fuels,” he noted. “We are moving to a more balanced and diverse mix of zero-carbon power generation – a mix that will be capable of delivering reliable and robust baseload power.”

“There are faster, cheaper and smarter ways”

But some commentators remain critical of the project. Tom Burke, chair of climate change thinkthank EG3, said the Hinkley project is based on “expensive 20th-century technology that would soon be obsolete” and that “there are faster, cheaper, cleaner and smarter ways to deliver affordable, secure, low carbon electricity to Britain’s consumers. [Hinkley] is bad for consumers, bad for the climate and bad for the country.”

And John Sauven, executive director of environmental group Greenpeace, said in an interview with ITV News that the project raises “huge outstanding, financial, legal and technical obstacles that can’t be brushed under the carpet”, adding that the government’s revised deal with EDF “changes almost nothing”.

“Today’s decision hasn’t been made on the cold, hard facts that show Hinkley will not deliver competitively priced, low carbon energy any time soon,” he said. “Instead it seems that Hinkley became too big to fail.”

Dr Nina Skorupska, chief executive of the Renewable Energy Association, said: “Renewables such as solar, onshore wind and biomass are already cheaper than nuclear, are quicker to deploy, and have none of the construction or economic risk. From the time Hinkley Point C was proposed to now we’ve seen extraordinary advancements in technology, falling costs, and high deployment rates.

“Since the project’s initial consultation in 2008 the UK has gone from producing less than 6 per cent of its electricity from renewables to over 25 per cent in the first quarter of 2016. Our analysis shows that for nearly every renewable technology the equivalent amount of capacity could be procured at much lower cost using renewables.

“While we welcome a diverse low-carbon energy mix,” she said, “we urge the government to consider the costs and support other industries in which the UK could be a global leader, such as energy storage.”