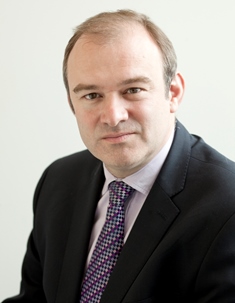 UK Energy Secretary Ed Davey has warned that Scotland will damage its standing as a prime mover in renewable energy if it votes to become independent.

Speaking at the All Energy conference in Aberdeen today, he said: “I believe Scottish renewables have flourished precisely because Scotland is part of the United Kingdom. Our collective energy system has underpinned the success seen to date.”

Scots will vote in a referendum on independence next September and Davey (pictured) urged caution over a ‘yes’ vote.

“Scotland could go it alone, just as the United Kingdom could go it alone outside the EU,” he said. “But in both cases our respective citizens would be less secure, less prosperous and less influential.”

He said that under the UK’s current Renewables Obligation system, “some 37 per cent of the support – around £530m annually – goes to Scottish renewables projects”.

“But only 9 per cent of UK electricity sales are here in Scotland. So would an independent Scotland be able to deliver the same support to renewables on the back of a domestic electricity market that is only one 10th the size of the UK?

“At present, Scottish renewables benefit from the ability to spread investment costs across the whole of the UK consumer base. As part of the British energy market, Scotland and its energy industry, as net exporters of energy, have access to a market of more than 23 million households and the integrated energy networks that deliver them.

“We cannot assume that English, Welsh and Northern Irish consumers would still be willing to subsidise Scottish renewables.”

Davey said “it will be much harder for a nation potentially having to spread the costs of investment in renewables across just two and a half million households to keep prices competitive.”

The energy secretary also used his speech to reveal new figures from his department that show that since 2010, more than £29bn of investment has been announced in UK renewable energy.

“The UK offers a uniquely attractive, stable, transparent and supportive environment for investment in low carbon generation,” Davey told delegates. “Between now and 2020, the support we give to low carbon electricity will increase year-on-year to £7.6 billion – a tripling of the support for renewable energy.

Today is not the first time Davey has issued a warning to Scotland over independence. In March he said the future of Scottish renewables “is more secure with Scotland as part of the United Kingdom”.

He said then that if Scotland became independent it would be “treated by the UK as just one of a number of countries it could buy renewables from”.

“We are pursuing a number of interconnection projects with our European neighbours, including Norway and Ireland. For an independent Scotland, this would potentially represent serious competition. If the UK were to look beyond its borders for renewable energy, we would need to consider which sources provide the cheapest and most reliable options for our people.”

He said that “could be from Scotland, but it could also be from Ireland, from Norway or elsewhere.”

Scotland is a hub for renewable energy – it offers some of the best on-and offshore wind sites and is home to the European Marine Energy Centre in Orkney.

What is of greater concern to ministers in London, however, is what would happen to Britain’s vast oil and gas reserves in the North Sea if Scotland became independent.

The assumption would be that most of these reserves would fall into Scottish territorial waters, making Scotland “an exceptionally wealthy country” in the words of its Energy Minister Fergus Ewing.

Ewing appeared before the Westminster parliament’s Energy Select Committee last year to discuss independence implications, and said that “the value of Scotland’s oil and gas reserves are absolutely extraordinary”.

He also maintained that the independence topic was not in any way deterring investment in Scotland.

“There has been very substantial investment in the Scottish energy sector and these decisions show that there is not a lack of confidence in Scotland.”

To stress his point he named a list of companies which have taken key strategic decisions to locate in Scotland, including Gamesa, Samsung and Global Energy.

“Would these decisions have been made if the world was afraid of coming to Scotland? I don’t think so,” he said.

He told 200 energy chief executives at a FT Global Energy Leaders summit in London that Scotland will continue to be a major centre for global investment and that independence will help growth.

He stressed his commitment to a “clear, consensual and consultative” approach to energy policy that will continue in an independent Scotland.

“Right now Scotland helps meet the energy needs across these islands. We have set clear, long-term targets, which provide the worldwide energy industry with confidence, and we are investing in skills and infrastructure for the long-term.

“We have the political will, the industry and academic capability and the engineering expertise that has helped Scotland become an energy powerhouse.

“That will continue in a shared marketplace, and we will work to ensure that an independent Scotland will continue to provide an attractive investment environment within the prospect of a common European energy market.”