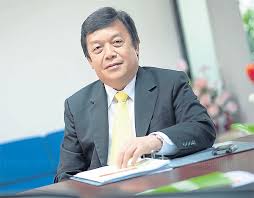 Thai newspaper The Nation reports that the talks between Ratch and independent and small power producers (IPPs and SPPs) include potential joint ventures in a 100 MW cogeneration plant and two waste-from-energy plants on home turf, while the larger overseas projects include two solar power plants in Japan, totalling 39.8 MW; a 200 MW combined-cycle gas-fired plant in Myanmar and a 230 kV transmission line in Cambodia.

All of the agreements are expected to be concluded by the end of the year. Ratch chief executive Pongdith Potchana (pictured) told The Nation that his company is ready to submit a final bid on the Myanmar project, with the results to be announced in October.

Ratch said the moves are designed to cement its leadership in the Thai power market while expanding its competence in new markets overseas, and to increase its capacity by 38 per cent to 9.7 GW by 2023.

The moves also come as Thailand’s government is set to approve a new mechanism, called International Infrastructure Trusts, designed to allow Thai companies to raise funds locally for infrastructure projects abroad. According to Vorapol Socatiyanurak, secretary general of the Securites and Excange Commision, the new rules are expected to be approved as soon as this quarter.