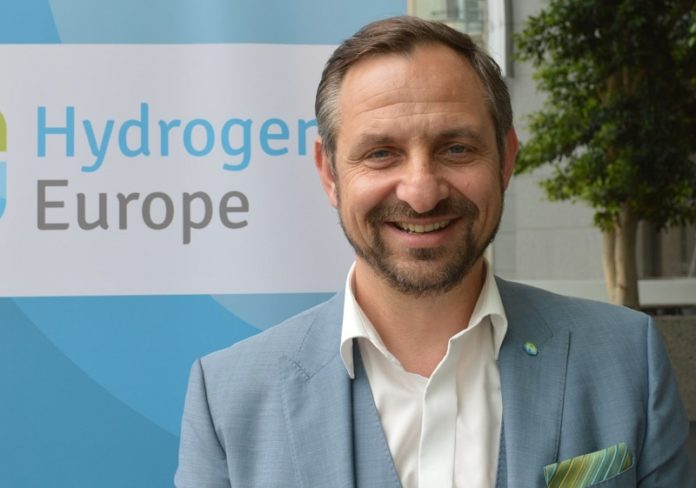 “Climate action plans on a global, national and regional level have led to an unprecedented moment for hydrogen as multi-talent in the energy transition.”

So says Jorgo Chatzimarkakis, Secretary General, Hydrogen Europe, who states that hydrogen “has the potential to be essentially a zero emission energy vector and it can store and distribute renewable and decarbonised energy across geographic distances and over long periods”.

“End-users can benefit from it as an energy carrier for plenty of applications like heat or as a fuel for the transport sector.”

He also stresses that “industry can use it as a green feedstock, for example when producing steel. The challenge for distributors of this ‘new oil’ will be, however, how to turn the infrastructure fit for hydrogen and how to adapt finally all end applications to the new situation.”

Here we asked Chatzimarkakis to further explore the potential of hydrogen.

What have been the significant hydrogen developments in Europe in the past year?

The previous year was packed of news and activities for the hydrogen sector which brought us into the new decade starting with fireworks at the stock exchanges for hydrogen technologies. Many stocks went through the roof and this is just the starting point of a development that will mark a new era of energy business.

Not only businesses but also governments have started to have the same hydrogen friendly approach: Austria was the first this year among the EU-countries to present a new coalition and a government programme culminating in the target: “We want to become the number one hydrogen nation”. This was also announced by the German government that finally presented the draft of their hydrogen strategy.

Also, some of our member companies started to decisively enter into the debate of their national strategy like SNAM in Italy with Marco Alveràƒ¡ claiming to make Italy the hydrogen leader in Europe. This all is very much to the liking of  Commissioner and First Executive Vice President of the EU Commission Frans Timmermans. He repeatedly highlighted the pivotal role of hydrogen in the energy system, stating: “We will massively invest into hydrogen”.

This all looks like the starting point of a coherent European Hydrogen Strategy. Indeed, it’s high time to come up with a coordinated approach at EU level that allows national specificities but that also has the overall capacity of hydrogen for decarbonisation in mind.

A real hydrogen strategy needs, on top of clarifying legislation, also an industrial initiative, a ‘Clean Hydrogen Coalition’. The European Commission has shown with the ‘Battery Alliance’ that it can lead definitely to a push using all instruments at hand. With the help of previous innovation initiatives like the ‘Fuel Cell Hydrogen Joint Undertaking’ the groundwork to build up an ecosystem that can kick off immediately has been done. Additional activities to enhance the whole value chain via IPCEIs (Important Projects of Common European Interest) show first encouraging results.

What milestones are you hoping to see achieved by the end of 2020?

The establishment of a Clean Hydrogen Alliance at EU-level accompanied by an EU Hydrogen Strategy which might encompass many national strategies on hydrogen. Also, we need to start the legislative process on the creation of a framework that prepares for hydrogen. Currently, this features under the upcoming ‘Smart Sectoral Integration Package’.

Where is the ‘low-hanging’ fruit for using hydrogen in the energy sector in Europe?

The supply of clean hydrogen to industries with an intensive energy use of hydrogen as chemical feedstock (such as steel, chemical and petrochemical industry as well as fertilisers). They need hydrogen in big volumes and producing decarbonised hydrogen for them will definitely ignite also the other sectors such as mobility and heating.

In which aspect of the energy section does hydrogen have the potential to be most transformative: Heating? Transportation? Power generation? Or something else?

All of them, including industry, need hydrogen as a feedstock. Insular solutions are not efficient when building up and running a hydrogen-based system. We should go away from the silos-thinking and have a sectoral integration approach.

Would you say Europe is leading the way in hydrogen?

In certain sectors definitely yes, especially when it comes to the use of water electrolysers in order to transform renewable electrons in green molecules. This leads to the sectoral integration based on the coupling of the electricity and the gas sector. Here Europe is number one. In other sectors, like mobility, we have to catch up.

What are the financing hurdles that need to be overcome?

Mainly infrastructure. With regards to the technology and the famous 5 phases of a hype cycle, we have gone through the first four and are now at the final slope ready for the ‘plateau of productivity’ as the technology has reached maturity in many aspects. However, the final push – as always when introducing new technologies – has to be mastered. However, we are close and the financial markets have understood which is why as of January 2020 the shares for hydrogen technology providers went through the roof.

Does hydrogen’s success depend, even in part, with first movers working with incumbents and not against each other?

Indeed. With the upcoming Clean Hydrogen Alliance and the underlying Important Projects on Common European Interest (IPCEI) on hydrogen, we have tools to bring all important stakeholders together who might become quite soon competitors.

Is there a need to accelerate innovation in hydrogen? And if so, how do we do this?

There is always such a need, for any technology, hydrogen is included. Fortunately, we have on a EU level a Joint Undertaking which deals with this need and makes sure to promote and foster R&I at European level. It will be called as of next year Clean Hydrogen for Europe.

Hydrogen Europe will be playing a major role in this year’s Enlit Europe in Milan in October.