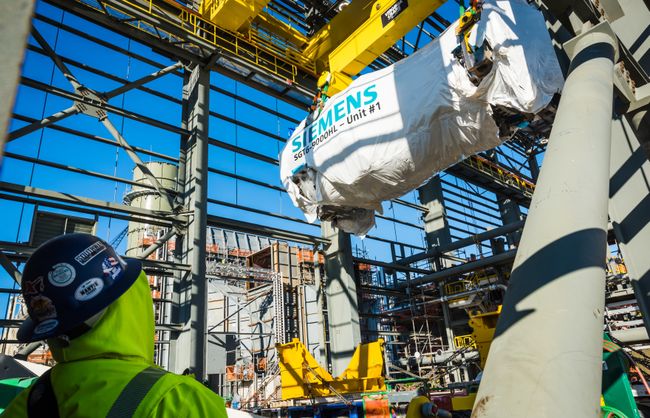 Siemens Energy has successfully started up the first SGT6-9000HL gas turbine to kick off long-term testing phase in North Carolina.

The company started up the air-cooled, four-stage power turbine at Duke Energy’s Lincoln Combustion Turbine Station near Denver, N.C. It is in the beginning stages of a four-year testing period where Duke will operate the unit in simple-cycle mode to assess and modify new technologies in real time.

The HL-class’s engine architecture is composed of an air-cooled four-stage power turbine, hydraulic clearance optimization for higher efficiency at full load while facilitating immediate restart, a steel rotor design with Hirth serrations and a central single tie rod and a “can annular” combustion system, according to Siemens.

The first fire, or startup confirms the engine, gas supply, lube oil, control and startup systems are all working together as designed. During first fire, the SGT6-9000HL ramped up to a pre-determined test speed and the combustion system ignited.

Siemens delivered the 402 MW unit to Lincoln Station in November (pictured). The 340-ton turbine was transported from the company’s manufacturing plant in Charlotte, N.C.

Duke Energy customers will receive the unit’s 402 MW of energy during the four-year testing period while only paying some fuel costs. When testing is completed in 2024, Duke Energy will begin operating the unit, which will supply enough energy to power more than 300,000 homes in the Carolinas.

The gas turbine’s ramp-up rate is about 85 MW per minute, maximizing operational flexibility and integration with fluctuating renewable generation. With increased inspection intervals of 33,000 equivalent base-hours and 1,250 equivalent starts, the unit will also provide outstanding reliability and lower life-cycle costs.

Duke Energy started construction on its Lincoln expansion project in September 2018. The 16-unit power plant was selected because its 746-acre site allowed room for expansion.

Siemens’ new line of gas turbines can be adapted to burn 30 per cent zero-carbon hydrogen in its fuel mix. Utilizing selective catalyst reduction technology the nitrogen oxide emissions can be reduced to only two parts per million, according to the company.