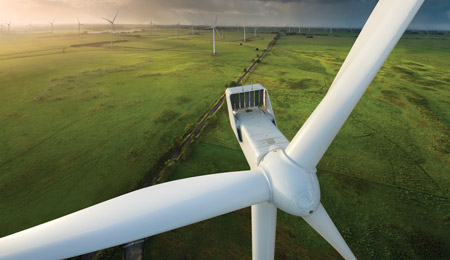 Technological and commercial innovation is accelerating as the European power market reaches the vital nexus between renewable and traditional power. Nigel Blackaby outlines some of the trends and issues to be examined in detail at the POWER-GEN Europe and Renewable Energy World Europe conference and exhibition being held in Amsterdam

The power sector in Europe is experiencing radical and permanent change. The conventional model of supplying electrical energy to customers from central power plants via one-way systems is becoming increasingly challenged as a direct result of policies to reduce the emission of greenhouse gases (GHGs) and decrease dependence on energy from fossil fuels.

Europe’s power industry professionals are responding to this challenge to the status quo and will be debating these issues at this year’s POWER-GEN Europe and Renewable Energy World Europe conferences in Amsterdam on 9-11 June.

The pace of change looks set to increase as the new package of climate and energy policies unveiled by the European Commission in early 2014 drives a fresh wave of cleantech investment. Designed to cut GHGs by 40 per cent against 1990 levels by 2030, the proposed framework includes a binding target for EU member states to source at least 27 per cent of their energy from renewable sources by the same date. A non-binding target to encourage countries to improve their energy efficiency by 25 per cent through the 2020s is also being considered.

The financial and operational implications of accommodating renewable energy and meeting emissions targets mean utilities must become smarter in the way that they operate. This has driven development of innovative business models, new technologies and a new range of services. Utilities and investors are now focusing on smart meter rollouts and deployment of technology at a distributed local level rather than making 30-year commitments to large power plants. But technology developments are ensuring that there is life in conventional plants yet. Operators of increasingly flexible gas-fired generation foresee a vital role in their fast-dispatch ability which can meet demand when the more intermittent forms of generation are not available. And state-of-the-art co-firing technologies allow biomass to be used as fuel alongside coal, with some plants even converting from coal to biomass completely.

Biomass takes carbon out of the atmosphere while it is growing and returns it as it is burned, thus maintaining a closed carbon cycle with no net increase in atmospheric CO2 levels. As such, it is considered as a renewable source that has limited impact for the environment.

As importantly, it means that the by-products of industrial, commercial and domestic consumption that would previously have been discarded can now be reused as fuel for power. The use of biogas is rising, and technology manufacturers are responding accordingly, with solutions around gasification and pyrolysis where the fuel is heated with little or no oxygen to produce ‘syngas’.

The significant carbon and energy benefits of converting waste to energy has seen these plants established as an essential part of both the waste management and energy supply networks. There are now more than 450 waste-to-energy plants in operation across Europe, with countries such as France, Germany and Italy leading the way. Frost & Sullivan analysts predict that global revenues in waste-to-energy plants will reach $29 billion by 2016.

Harnessing energy from waste has many benefits. It helps nations reduce their dependency on energy imports, and contributes towards reducing carbon emissions and meeting renewable energy targets. Crucially, these types of technologies have a steady and controllable output when used for electricity generation.

The need for a more sustainable approach to energy management and tighter integration is being driven by a global trend towards urbanization. 2010 was the first time in the history of mankind that more people lived in a city than in a rural area, and by 2025, about 60 per cent of the world’s population (4.6 billion people) will live in urban areas. This will pose serious challenges for city planners, who need to re-think how they provide basic city services to residents.

More municipalities across Europe are developing district schemes to provide both heat and electricity to thousands of homes. This offers a diversity and independence of power generation rather than relying on national utilities. This type of urban energy integration is underway within metropolitan areas in Genoa and Copenhagen, for example, which are looking at their overall energy management and services to integrate electricity, heat, water and waste water at city level.

According to Frost & Sullivan, there will be 26 smart cities and 90 sustainable cities globally by 2025, presenting market opportunities worth $1.5 trillion in areas such as infrastructure development, technology integration, and energy and security services. Smart cities will lead to the adoption of at least five of the eight following smart parameters: buildings; citizens; education and governance; energy; mobility; healthcare; infrastructure and technology.

With smart energy a fast-growing market segment, major cities such as Hamburg, Vienna and Amsterdam are now starting to work with the energy sector and end users to co-ordinate the energy supply issues in their area by mapping local needs and finding optimum solutions. They are developing smart grids by introducing smart meters that enable an overall improved service to their customers and a more efficient grid operation, and which could eventually include the development of a complete electric vehicle and energy storage infrastructure.

A successful rollout of electric vehicles depends on a responsive ‘smart grid’ to allow charging of these new modes of transport. Furthermore, the whole integration model comes full circle where there are utilities managing waste collections and then using that waste in order to generate electricity and heat or chilling in combination with energy storage solutions.

POWER-GEN Europe and Renewable Energy World Europe will present an ‘Urban Energy Integration’ conference track for the first time this year. A number of the conference sessions cross over between different themes, as the energy industry moves towards a closer integration of interests. It promises to be a great learning and networking experience.

A viable and cost-effective energy storage mechanism would help manage demand peaks and troughs, and would therefore prove a potential game changer in the context of renewables. Although storage technologies are developing fast, they have yet to attain a level that would make them viable commercially; storing energy in the form of heat is one option that holds great promise.

The concept is to store surplus electricity on a sunny or windy day by heating up water, and either storing it in that form or using it to heat or chill buildings. The latter can be achieved using thermally activated absorption chillers, adsorption chillers, or desiccant dehumidification systems. Absorption chillers, for example, produce chilled water by separating two different substances that are in thermal equilibrium using heat, then reuniting them through heat removal. Two substances that may be used for this process are water (acting as the refrigerant) and lithium bromide (the absorbent).

Absorption chillers use heat from natural gas combustion or a waste-heat source to drive the process. They can be used in conjunction with combined heat and power (CHP) or cogeneration projects to provide tri-generation or combined heat, power and cooling (CHPC) schemes that are typically embedded close to the end user. As such, they help reduce transportation and distribution losses to improve overall grid performance.

The ability to store the electricity generated by renewable energy in sufficient quantities and at a cost that makes commercial sense would open the door to an even greater penetration of renewable energy-sourced power than is currently technically feasible.

Much development and research is being undertaken in a variety of storage mechanisms such as lithium-ion batteries, compressed air systems, and chemical and electrical energy storage. Projects incorporating large-scale storage are starting to emerge, but there remains some way to go before these technologies become widely used.

Carbon capture and storage (CCS) may have received a fair amount of negative press, but the fact remains that it is a necessity, given that both coal- and gas-fired plant will be required for the foreseeable future to provide baseload or instant power when needed. The European Commission sees CCS, or carbon capture and reuse (CCR), as an important tool for energy policy. In Europe, the UK has two pilot projects operating at commercial scale, while the ROAD project in the Netherlands is waiting for financing to be agreed.

As of November 2014, there were 14 CCS projects globally at the advanced planning stage – including nine in the power sector -expected to be in a position to make a final investment decision in 2015, according to the Global CCS Institute. Certainly, if stricter policy on carbon emissions is enforced for coal- and gas-fired plant as expected, there is a compelling driver for Europe’s power industry to bring CCS technology to fruition.

In the renewables arena, there is now greater attention being given to operating and managing renewable energy assets more efficiently. This will be essential as the technology matures and reaches a critical mass on the grid. But while there has been a great deal of focus on renewables, it remains important for conventional power generators to continue advancing their efforts too.

Fortunately, the energy technology sector has always responded to whatever challenges are put in front of it. So while the current changes being brought about by Europe’s energy transition are disruptive, they also represent an opportunity to which the energy industry is rising. And with policy now such an important driver for technical decisions, regulation and investment also form a key part of the debate for plant operators, decision-makers and specifiers facing tough choices about when and how to adapt, modernize and optimize Europe’s energy infrastructure as advanced technology emerges.