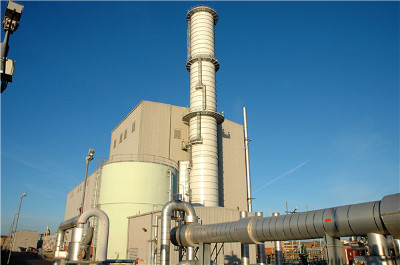 The UK‘s Great Yarmouth power station (pictured) is to be restarted by late October, operator RWE said in a statement today.

The 400 MW gas-fired plant has been shut down since March, when a fault caused a turbine blade to fail and also damaged the compressor blades.

RWE says it is rebuilding the GE turbine. According to the company, the 10 metre long, 3 metre diameter, 90-tonne rotor has been transported by barge and trailer to GE’s workshop in Belfort, France, where it will be repaired.

The rotor will then return to Great Yarmouth in early October, where it will be re-installed by the RWE Generation Maintenance Outage Support team, the company said.

Kevin Nix, Head of RWE Generation UK, said: “It has been a very difficult couple of months and I would like to thank everyone at the power station and RWE Generation Maintenance Outage Support who have worked together on finding a cost-effective solution.”

Distributed Assets Group Manager Kerry Nesbitt said, “We are working hard at a return of the plant to commercial operation on time and on budget.”

Great Yarmouth was commissioned in 2002 and supplies power to a third of a million homes. The company aims to have it back online in time for the winter months.