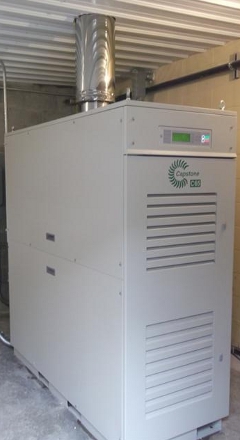 A US cheese manufacturer is set to make a saving of $40,000 a year in electricity costs, after deciding to power its operations through on-site waste water.

Pearl Valley Cheese Co., an 80-year-old family-owned business in central Ohio, is going green with an energy-saving power system that runs on cheese manufacturing waste water and promises to save the company more than $40,000 per year in electricity costs.

The advanced system, custom-designed and installed by GEM Energy of Walbridge, OH, is powered by a C65 Capstone® MicroTur­bine, which is capable of producing 65 kW of electricity. The system will run on methane gas from recycled cheese manufacturing waste water.

By recycling waste to generate electricity, Pearl Valley Cheese has reduced its use of coal-generated electricity, as well as greenhouse gas emissions. These were important steps in meeting Pearl Valley’s sustainability goals – because methane’s green­house gas impact on the atmosphere is 21 times greater than carbon dioxide, and burning methane in a flare completely wastes its energy value.

Pearl Valley has been using the digester gas to fuel the steam boiler for process heat, but based on falling natural gas prices and rising electric prices, the company ultimately decided on a technology that could generate electricity with the renewable fuel.

Pearl Valley’s owners chose a Capstone Microturbine, with its ultra-low emissions, low maintenance cost, quiet operation and ability to handle gas with a high sulfur content as the best fit for their facility.

The system allows Pearl Valley to operate on multiple energy sources, including electricity, natural gas and biogas – which reduces the impact of sharp increases in cost for any single energy source.