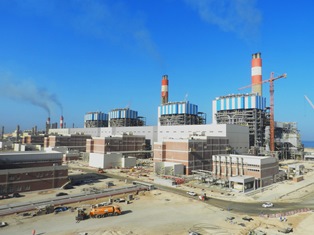 Major economies in the Middle East and Africa are set to invest over $717bn in power generation projects in the coming years to increase generating capacity by 379 GW, according to a new report.

The study from analysts at Timetric Construction Intelligence Center found that of 21 countries analysed, Saudi Arabia leads the field with projects valued at almost $150bn, followed by South Africa at $118bn and Nigeria with $95bn.

Timetric said that developing African countries such as Mozambique, DR Congo and Tanzania have growth in excess of 7% GDP “and their governments are investing heavily to reduce the frequent power failures which afflict their economie

Of the $717bn total projects that are planned or already underway in the 21 countries studied, nuclear power dominates, with $183bn worth of projects, again headed by Saudi Arabia, followed by gas-fired projects with $142bn, led by Nigeria.

Solar power is in third place with projects valued at $122bn in 17 of the countries studied.

Timetric CIC manager Neil Martin said: “The developing countries in Africa are showing high growth in their economies but need to create and maintain reliable power generation infrastructure for their populations and industrialising economies.

“Solar, hydroelectric and wind schemes figure largely in many African countries’ power generation strategies. The Middle East economies are seeking renewable sources of power whether biomass or solar; however, Saudi Arabia is still the leading user of oil for power generation and like its UAE neighbour is investing in mega nuclear projects.”

The largest value project tracked by Timetric CIC is the $100bn King Abdullah City for Atomic and Renewable Energy in Saudi Arabia, which is planned for 2016. Other major projects in the region are the $30bn Barakah nuclear plant in the UAE which is already underway and a $30bn solar plant in Nigeria which is at the planning stage.