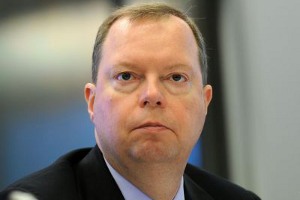 Top German utility RWE is to focus its attentions on decentralised energy and services in a bid to recover from disastrous financial results announced this week.

Germany’s decision to transition to renewable energy has hurt RWE’s coal- and gas-fired plants and has eroded much of their former earnings power.

It has led company chief executive Peter Terium (pictured) to announce that he expected earnings contribution of about $686m (€500m) from services and decentralised energy by the end of the decade, as RWE looks to make up ground in green energy development.

“I grant we have made mistakes. We were late entering into the renewables market – possibly too late,” RWE chief executive Peter Terium told a press conference.

Terium pledged the group would increase efforts in new energy efficiency and renewable power to drag it out of a sector crisis that has destroyed more than 70 per cent of its share value since 2008.

He added that centralised generation is losing its primacy and the decentralised energy world needs an ‘integrated energy manager’.

“In other words, someone to coordinate the many activities of the individual market players: someone to look after networking the various individual initiatives involved in the transformation of the energy system at a technical and economic level ” to bring them all together as a single, integrated unit.”

Terium intends to try to join the “little pieces to form the bigger picture.”

RenewEconomy online reports that RWE is now looking at “decentralised energy bundles” for small and medium-sized municipal utilities and sees electric vehicles as a core element of the energy system, because of their ability to serve as decentralised energy storage units.

It is also rolling out heat pumps to consumers, and it is offering solar PV systems and wind turbines to allow local energy communities.

“This is something that only major energy utilities can manage. They are the only ones that bring all the necessary skills together under one roof. We have some new public participation models in mind in this regard,” Terium said.