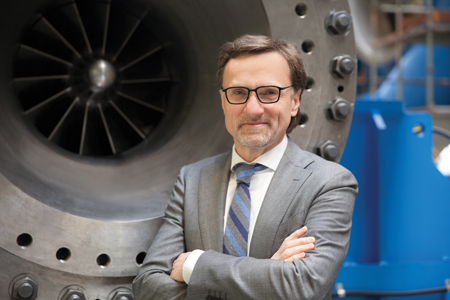 PEi: What policy decisions from governments would stimulate your sector in Europe and elsewhere?

A: In general, electricity prices are at a low level, which favours old and outdated power plants that use fossil fuels such as coal. On the other hand, though, high amounts of funding are being put into the expansion of renewable electricity generation in many countries. Here in Germany the ‘energy revolution’ – or Energiewende – is a prime example. We already have so much fluctuating solar and, above all, wind power in the grid that its capacity is exceeded on productive days and planned massive power lines and storage options are currently the subject of heated public debate. The need now is not for further expansion but for mastery of the situation. When wind turbines have to be switched off because of overcapacity, this is of no help to anyone. In our view, small gas power plants make particular sense. As they are decentralized, they are in a position to stabilize the grid very quickly. And if they are realized as CHP plants, they have compelling efficiency levels of over 80 per cent. Natural gas is also a comparatively low-emission fuel. However, investment incentives have been reduced rather than increased for precisely these types of plant. As a member of the Association of German Machinery and Plant Manufacturers (VDMA) we supported its calls for a general shift of policy in Germany towards decentralized CHP. The current statements of some of our politicians calling for a move away from the target of 25 per cent CHP share of the German energy market in 2020 is a bad sign for efficient and easily controllable decentralized power plants. We are therefore hoping for a rethink.

I have quoted this example because Germany, with its ambition of an energy revolution, is under global scrutiny. We are seeking dialogue with politicians and very much hope that our proposed solutions will be heard. The right technology exists. Only if the Energiewende works with us can it set an example worldwide. And that would help not only our sector but others too.

PEi: Which region of the world currently offers the most turbomachinery potential for MAN Diesel & Turbo? And why?

A: There is more than one answer to this question. In the US the shale gas boom has tapped undreamt-of reserves and stimulated the natural gas market worldwide. In Asia and Africa, efforts are being made to generate electricity more efficiently and more cleanly. This has not, however, produced a clearly identifiable focus of activity for us. Our range of turbomachinery products includes compressors and expanders for the oil, gas and process industries as well as steam turbines up to 160 MW and gas turbines up to 13 MW. We supply turbines as a drive solution for our compressors. This performance range is also suitable for decentralized industrial power generation where we can serve various small types of plants such as cogeneration, waste incineration and biomass as well as combined-cycle. Essentially, we offer solutions for which there is worldwide potential. What this means in practice is that we tend to identify trends for particular regions in terms of the type of power plant.

PEi: Can you illustrate this with examples?

Up to now the UK has exported and disposed of a large proportion of its waste abroad. The country is now building up its national waste incineration capacities and therefore creating new projects. Here we are currently supplying the complete turbine generator set for the construction of the highly efficient Wilton 11 waste incineration plant in Middlesbrough. Our DK 100/400 R condensation steam turbine will generate up to 50 MW of electricity.

By contrast, our latest MGT series of gas turbines is at present gaining a foothold in the Chinese market. Four 6.9 MW MGT gas turbines will be used in future by the Shanghai Volkswagen Automotive Company in a combined heat and power facility.

PEi: What is the future for gas turbines in MAN’s performance category?

A: The demand for gas turbines is currently growing globally by two to three per cent per year. The big exception here is China. Only recently the government decided to limit CO2 emissions by 2030 at the latest. Decentralized CHP plants with gas turbines under 10 MW play a crucial role here. In addition, Beijing has recognized that solutions must be found to combat environmental pollution, for example heavy smog. What this means in practice is that China is moving away from coal and towards natural gas. The precise potential for gas turbines cannot at present be quantified. However, it will be significantly higher than in any other country in the world.

In the public electricity networks of many countries in which strongly fluctuating renewable energies such as wind and solar power have an ever-increasing share, compact gas turbines represent an ideal backup solution. In addition, we foresee that methane will play a key role worldwide in the future as a clean energy source. According to various studies it will be available for decades as natural gas and can be produced today renewably using a variety of methods.

PEi: Which current development trends are you pursuing?

A: Firstly, procurement and, above all, operating costs play a decisive role for customers. And secondly, exhaust gas standards are being tightened up in many countries across the world. In particular, there are stricter limits for nitrogen oxides. As manufacturers we must comply with the requirements of the legislators as well as those of our customers – in the latter case as far as possible without restrictions or additional costs. In addition to particularly high efficiency levels, one of our primary development goals was therefore to ensure that the entire MGT gas turbine family is both economically efficient and environmentally friendly.

PEi: What does this mean in practice?

A: The single-digit NOx values in the load range between 50 and 100 per cent obtained with the MGT 6100 provide evidence that we have achieved our goal. On our own test stand in Oberhausen we demonstrated levels of less than 10 ppm nitrogen oxide in the exhaust gas in all gas turbine operating modes between half and full power. By comparison, the German Federal Emissions Control Act, in its ‘Technical Instructions on Air Quality Control’, specifies a limit of 36.5 ppm, which corresponds to 75 mg/Nm3.

We have achieved these values with the aid of our own combustion chamber technology through the adaptation and optimization of the “Advanced Can Combustor” (ACC), which was developed for our long-established THM gas turbine family. These can combustors use premix technology, i.e., the fuel is pre-mixed homogeneously with the combustion air before entry into the combustion chamber. Fuel-rich, hot strands are thereby avoided. This results in far less nitrogen oxide being formed in the exhaust gas without the need for additional time-consuming and expensive post-treatment systems. In a next step we aim to guarantee very low nitrogen oxide values to our customers on the basis of test results, thus further increasing the competitiveness of the gas turbine.

PEi: And what is your future forecast for steam turbines?

A: We are seeing a trend towards renewable energies, particularly in the industrialized nations. This change entails a great deal more than the development of photovoltaic and wind power facilities, which is being seen in many areas. We definitely see ourselves as a partner in the ‘energy revolution’, not least because many of these types of power plants are capable of meeting baseload requirements and are therefore able to contribute to the stability of power networks. The higher the proportion of fluctuating energy sources such as solar or wind power in a power grid, the more important this factor becomes.

We have supplied the 220-tonne steam turbine for the 100 MW CSP Shams 1 power plant in Abu Dhabi, have fitted out numerous waste incineration plants in Europe and have been involved in the generation of electricity from the waste heat of a smelting works in Norway. We have equipped many regional biomass power plants with our MARC series of steam turbines, which were specially developed for industrial power generation. These require small turbo generator sets, which we can deliver in sizes from 1.5 MW upwards.

PEi: Are you seeing increased demand for waste-to-energy technologies, biomass and concentrated solar power? In which regions is this happening?

A: As already mentioned, the UK is building up its own waste incineration capacities. These plants are currently often realized as waste-to-energy applications. Anywhere that waste needs to be disposed of and is available as a fuel source, converting it into electricity is a logical step. The residual heat can also be used in CHP plants, for instance to heat neighboring industrial or residential areas. We also see potential here in Eastern Europe, for example in Poland.

PEi: And what about biomass?

A: We have been involved in numerous biomass projects in Europe. German and Austrian plant constructors have built up their technological leadership in Europe in this area over the last few years. A type of formula power plant with certain standard components has become established and has been a real success on the export market. For this reason we adapted at an early stage to certain boiler sizes and developed the MARC 1 steam turbine to be able to equip even power plants of between 1.5 and 3 MW. However, the number of biomass projects in Europe is directly related to the existence of national programmes to expand capacities specifically in this segment. Conditions in Europe are currently difficult as most programmes have come to an end.

PEi: How do you assess the market in emerging countries?

A: In the emerging and developing nations the situation looks somewhat different. By 2020, we foresee emerging markets especially in African and Asian countries. They are building up infrastructure and their demand for energy is constantly growing. Small and decentralized biomass power plants are one trend we can see which is driven by the utilization of agricultural waste as fuel. However, the quality standards in these markets are different. Locally manufactured, outdated steam turbine technology is mainly in use here.

PEi: What future prospects do you see for concentrated solar power?

A: In terms of building CSP plants, Spain has up to now been the front runner. Unlike conventional plants, a solar-powered turbine must be designed to be started up and shut down each day according to the availability of the sun’s rays, and therefore of the steam. However, the notable success of the Spanish solar industry has had some major setbacks. Both the previous and current government have reduced solar funding with retroactive effect. This has destroyed the confidence of many investors. The market has therefore moved away from Europe. Major new installations are currently in the planning stage, particularly in the MENA region. When the 100 MW Shams 1 plant joined the network in 2013 in Abu Dhabi, the – at the time – largest CSP power plant in the world set new standards. With 125 MW gross power, the steam turbine we delivered was the largest ever built for a solar thermal power plant. In Southeast Asia and countries such as Israel, CSP is under consideration but on a smaller scale.