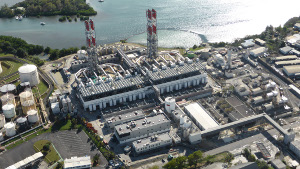 The 210 MW diesel-fired Pointe Jarry plant is located on the Caribbean island of Guadeloupe. It replaces the 30-year-old Jarry Nord, which was closed in December 2014, and is intended to cover around 45 per cent of the island’s energy needs.

It is the last of four island power plants MAN has completed for EDF since 2008. Previously commissioned were Port-Est on the island of La Réunion, Haute Corse on Corsica, and Bellefontaine on Martinique.

All four of the baseload power plants are equipped with 18V48/60 engines, each supplying 18.5 MW.

“’Pointe Jarry’ concludes a long-standing and successful partnership for which we would like to thank MAN,” said Jean-Michel Lebeau, president of EDF Production Energétique Insulaire. “The people on Guadeloupe are getting a state-of-the-art power plant that cuts fuel consumption by 15 per cent and nitrogen oxide emissions by 85 per cent.”