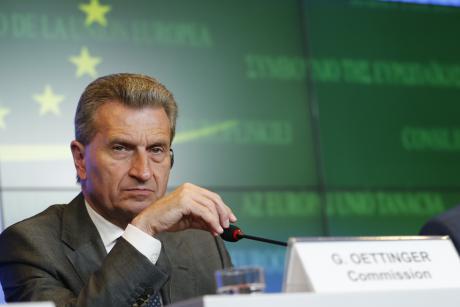 The spectre of Russian gas, quota transfers and the fears of energy-intensive industry are the major issues ahead of the EU 2030 energy summit in Brussels on Thursday and Friday.

The overall objectives centre on finalising targets to reduce greenhouse gas emissions, ramping up renewable energy and improving energy efficiency across the continent.

Discussions are taking place among member states in an attempt to come up with a cohesive European plan with a clear vision for the bloc on what it will argue for at the larger UN Climate Change Summit in Paris next year.

Proposals are being trashed out with a view to allowing energy-rich nations within the bloc to transfer 10 per cent of CO2 emissions quotas to member states such as Poland, who are struggling to diversify their energy mix.

Under this system, countries with a diverse energy mix, like France or Germany, would only sell 90% of their quotas at auction, while Poland and other countries with a carbon-intensive economy would receive the balance for free.

The beneficiary countries would then use the money from the sale of these quotas to invest in their own low-carbon energy mix.

Meanwhile the influential Energy Intensive Industries of Germany (EID) has warned that Europe cannot expect to remain competitive in the global marketplace if its energy plan amounts to a ‘solo effort.’

Utz Tillmann, a spokesman for the Energy Intensive Industries of Germany (EID) – which includes chemicals, steelmaking, cement and others told Euractiv he supported an ambitious agreement at the Paris UN climate summit in December next year.

“But we can only produce more competitively if there are comparable burdens overseas,” he stressed. “If Europe chooses a solo effort through a one-sided climate protection target of 40 per cent less emissions, it would mean billions in losses for us that our global competitors would not otherwise have gained. The damage done to competitiveness among energy-intensive companies in the EU would be considerable.”

In the UK the Confederation of British Industry (CBI) sent an email statement offering similar sentiments. Katja Hall, CBI Deputy Director-General, said: “It is vital that they make bold decisions on the future of the EU’s energy package for 2030 to give business the clarity it needs to make long-term investment decisions.”

“Competitiveness must also be at the heart of discussions, with greater support for energy-intensive industries ensuring that they can play their part in the transition to a low-carbon future. Demonstrating that Europe’s climate ambitions can go hand-in-hand with competition will be crucial as we head into next year’s negotiations in Paris.”

The threat to Europe’s energy security caused by the ongoing conflict between Russia and Ukraine is also casting a shadow over proceedings.

The sides failed to reach an accord on gas supplies for the coming winter in EU-brokered talks yesterday on Tuesday but agreed to meet again in Brussels in a week, in the hope of ironing out problems over Kyiv’s ability to pay.

Outgoing European Energy Commissioner Günther Oettinger told a news conference the three parties agreed on the price Ukraine would pay Russia’s Gazprom – $385 per thousand cubic metres – as long as it paid in advance for the deliveries.

But Russian Energy Minister Alexander Novak said Moscow was still seeking assurances on how Kyiv, which earlier in the day asked the EU for a further €2 billion in credit, would find the money to pay Moscow for its energy.

Citing unpaid bills worth more than $5 billion (€3.9 billion), Russia cut off gas flows to Kyiv in mid-June. The move added to East-West tensions sparked by Russia’s annexation of Ukraine’s Crimea and conflict in Russian-speaking eastern Ukraine and could have a knock-on effect on the Europe’s gas-fired power capacity as winter approaches.

Novak has ruled out Gazprom’s agreeing to let EU states re-export its gas to Ukraine.

US and EU economic sanctions against Russia, plus a fall in the price of oil, have increased incentives for Moscow to resolve the dispute. State-controlled Gazprom earns around €4.7 billion a month selling gas to the EU.

“We made another step towards a possible solution and are close to an agreement on important elements. Others still need to be addressed, such as the financial gap,” Oettinger said following Tuesday’s talks.