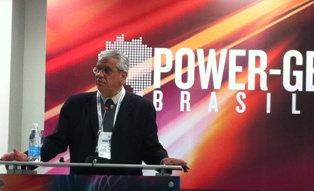 “Hydropower has become something of a curse that should not be mentioned” in Brazil, according to the boss of one of the country’s largest energy firms.

Speaking at the inaugural POWER-Gen Brasil conference and exhibition in Sau Paulo this morning, Flavio Decat de Moura (pictured), president of Furnas, said: “Hydro is treated as an evil.”

He said it was viewed with suspicion and added that “we are losing this communications battle, yet hydro is clean and good”.

And he added that his company would be striving to win its share of all potential power business, hydro or otherwise. Explaining that Furnas had suffered a BR$2bn ($908m) loss of revenue in 2012, he said: “We need to grow. We should be taking part in all OEM tenders in Brazil – it’s a fantastic opportunity for us.”

He was delivering one of the keynote speeches at POWER-Gen Brasil, which this year makes its debut alongside established shows HydroVisionBrasil and Distributech Brasil. Together, the three events boast 144 exhibitors, 40 conference sessions and 162 speakers from 15 countries.

The contribution that hydro and other renewable forms of power can make to Brazil’s bid to decarbonise its energy sector was emphasised.

Britaldo Soares, president of Brazil’s AES group, said that “sustainability is not a topic that we discuss of the sidelines”, stating that it was at the heart of all talks in every part of the business.

He said the future for Brazil’s energy make-up was a hydro-gas mix: “We have to strike a balance.”

And Sao Paulo energy secretary Jose Anibal talked up wind power, saying that the state had a potential of 4734 MW and harboured ambitions to emulate Germany’s scale of wind farm development.

He added that to help drive this ambition, current tax exemptions for wind were being extended to 2020.