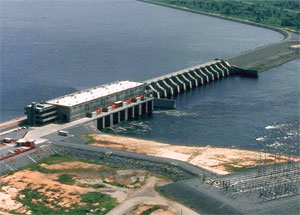 A Ghanaian hydropower plant which has been shut down for maintenance is being blamed for the nation’s current energy supply shortfall, Ghana’s broadcasting service (GBC) has reported.

Contributing to the nation’s power problem, one 40 MW unit at the Kpong hydropower plant (HPP) (pictured) has been shut down, while the 1020 MW Akosombo HPP is operating at less than full capacity and several units of the 330 MW combined-cycle Takoradi plant are being rehabilitated.

Ghana’s energy and petroleum minister Emmanuel Armah Kofi Buah told the GBC that the government plans to deply 450 MW to help the power situation. The report did not say where the extra power is to come from.

In a move to fix Ghana’s chronic power shortage, a new 500 MW gas-fired plant in Atuabo on the west coast is set to open in December after myriad delays. The government says it will save the nation around $500m per year in oil imports.

“I feel more excited about this gas plant than I did with the production of (Ghana’s) first oil,” said President John Dramani Mahama, adding that the facility is a “game-changer”.

Construction began in 2012 on the Atuabo plant (pictured), which was due to come online in December 2013. But the deadline went by, as did several set subsequently, due to disagreements with China over a $3bn loan funding the construction. Also in 2013, a container of equipment for the plant was lost at sea on its way from China to Ghana.

Once online, however, the Atuabo plant is unlikely to provide an immediate fix for Ghana’s power problems as its gas supply will not be guaranteed until 2017 when two new oil fields off the nation’s coast are set to begin production.