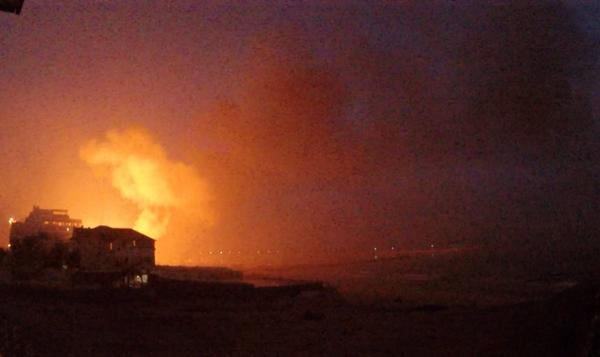 The Gaza Strip’s only power plant is offline after it was hit today by what some reports say were shells fired from an Israeli tank, and other reports attribute to a missile strike. The source of the bombardment could not be confirmed at this time.

A spokesman for the Gaza Electricity Distribution Corporation (GEDCo) told the Canadian state news service that shells had hit one of the diesel-fired plant’s three fuel storage tanks, forcing the plant to shut down.

The plant (pictured – photo tweeted by James Novogrod, NBC News), located in Gaza City, is currently on fire. Its director, Mohammed al Sharif, told Britain’s Sky News that the local fire service was not equipped to extinguish the blaze. “The power plant is finished,” Sharif was quoted as saying.

After it was hit last week the plant had been operating on reduced capacity, providing around three hours of power per day for Gaza’s 1.8m residents. The plant reportedly supplies around two thirds of the region’s power needs, with the rest imported from Israel.

It is now reported that the plant has been destroyed by the fire from the fuel tank. In a BBC interview, Fathi Sheik Khalil of Gaza’s energy authority said, “We need at least one year to repair the power plant, the turbines, the fuel tanks and the control room. Everything was burned.” He said plant staff were trapped by the fire for several hours but were eventually evacuated.