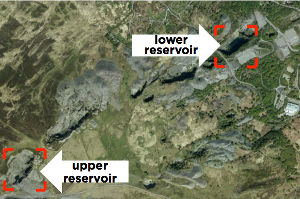 An application has been submitted to begin development on a 99.9 MW pumped hydropower storage facility in Wales, the project’s developers have announced.

The à‚£160m ($244m) project is to be undertaken by Snowdonia Pumped Hydro, a subsidiary of Quarry Battery Company (QBC), which has already received planning permission to develop 50 MW at Glyn Rhonwy near Llanberis. The developers now aim to double the plant’s output by increasing the capacity of the underground turbines and associated equipment. à‚

The project will repurpose two abandoned slate quarries, and is expected to have an operational life of around 125 years. à‚ Earlier this year SPH reached an agreement to lease 13 ha of land for the scheme from the UK government.

Glyn Rhonwy represents the first of a series of pumped storage schemes the company aims to develop.

QBC said it had recently submitted evidence to the Department of Energy and Climate Change (DECC) demonstrating how a 10 GW fleet of pumped hydro schemes to be built around the UK could cut à‚£3.5 billion per year from the cost of decarbonising the grid, reduce carbon emissions by 5 million tonnes per year, and make the UK’s electricity supply more secure.

Funded in part by a à‚£200,000 grant from DECC, QBC carried out a UK-wide geographical survey that identified suitable sites with low planning risk for some 15 GW of new pumped storage capacity.