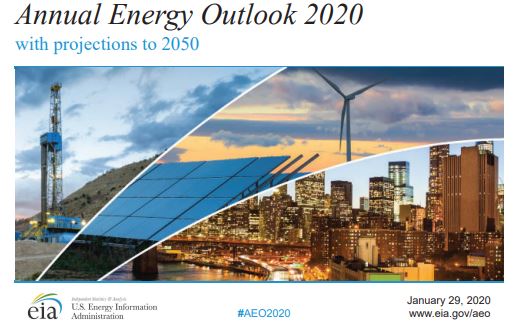 The U.S. Energy Information Administration (EIA) has released its Annual Energy Outlook 2020, and key takeaways include that U.S. energy consumption grows more slowly than gross domestic production throughout the projection period (2050), with renewables being the fastest-growing source of electricity generation through 2050.

The outlook explores long-term energy trends in the U.S.

Energy market projections are subject to much uncertainty because many of the events that shape energy markets—as well as future developments in technologies, demographics and resources—cannot be foreseen with certainty. AEO2020 includes a Reference case and side cases that systematically vary important underlying assumptions.

EIA develops the AEO with the National Energy Modeling System (NEMS), an integrated model that captures interactions of economic changes and energy supply, demand, and prices.

Specific to hydropower, the report indicates energy production by this technology will remain relatively flat through 2050. Of all renewable electricity production under the AEO2020 Reference case, hydroelectric power is expected to contribute 14 percent by 2050, compared with 37 percent in 2020. This change in percentage is attributed primarily to a significant growth in solar generation (from 15 percent in 2020 to 46 percent in 2050).

EIA is the statistical and analytical agency within the U.S. Department of Energy.