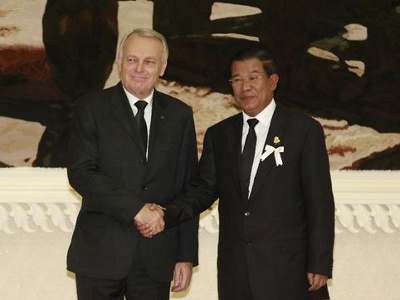 France’s EDF is in negotiations with Cambodia to construct a gas-fired power plant that would be fuelled by natural gas reserves located in disputed waters off the country’s coast.

French Prime Minister Jean-Marc Ayrault met Cambodian Prime Minister Hun Sen last weekend in Phnom Penh to discuss the deal and the company is close to signing a Memorandum of Understanding to enter into more detailed negotiations.
French ambassador in waiting, Serge Mostura, told media that, ‘the plant will enable the city of Phnom Penh to get the energy it needs.’

The Cambodian capital suffers regular blackouts during the hottest months of the year due to a lack of supply.

The deal is complicated by the challenge of access to the natural gas located in offshore blocks off the coast of the country that are in a disputed territory with neighbouring countries Thailand and Cambodia.

French oil firm Total has exploration rights in the area and is awaiting a resolution to the dispute between the three nations.

The Cambodian Daily says EDF hopes to build the power plant along the coast but has not specified where that would be.