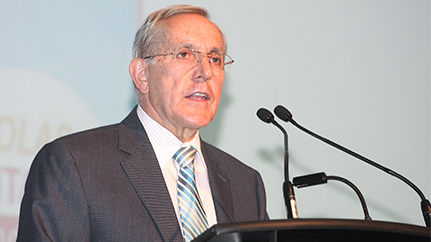 The Canadian state of Ontario minister of energy has announced that two new combined heat and power plants are to be built in the city of Guelph.

Bob Chiarelli, announced the details of the two plants at a news conference at Polycon Industries in the west end of the city.

One facility will be built at the Polycon location on Independence Place, with an expected completion date of Sept. 2015. This plant will use natural gas to generate a constant eight MW of power to help run the car part manufacturing plant.
The excess heat created from generating power will be captured and used in the plant’s production work.

Polycon Industries is set to save $2m per year with the installation of the plant.

The cost of the facility will be paid for by Polycon, and then after it is operational, the Ontario Power Authority has agreed to fund up to 40 per cent of its cost, or up to $7.1 million.

The second combined heat and power plant is scheduled to be built in the Hanlon Creek Business Park by the end of 2016. This plant will be constructed and run by Envida Community Energy Inc., a subsidiary of Guelph Hydro.

Chiarelli said this natural gas-fired facility will produce 10.2 MW of power that will be fed back into the grid under a 20-year contract with the Ontario Power Authority. This facility will take the excess heat created in the power generation process and use it in a direct energy system.

The City of Guelph installed a direct energy system at the end of last year.