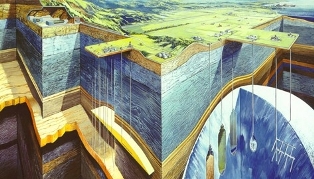 Asia and the Middle East will drive significant growth in the global gas storage market, according to a new report by analysts at French consultancy CEDIGAZ.

They predict that capacity will increase from 377bn cubic metres (bcm) this year to 631 bcm by 2030, and add that this incremental growth will need sustained investment of around $156bn.

CEDIGAZ says that new storage markets in Asia and the Middle East will account for around 60 per cent of the growth to 2030, with China in particular being a boom country.

However the report notes that “in these markets, storage infrastructure has to be built almost from scratch”.

It states that investment will have to focus on “creating large volumes of storage capacity as well as peak deliverability to cope with rising imports and growing city and power demand”.

In mature markets such as the US and most of Europe, the growth in storage capacity is limited, says CEDIGAZ.

“The focus is on increasing peak deliverability rather than storage volumes. In developed and liberalised markets, the gas industry has undergone massive changes, largely impacting the storage activity which performs new functions in addition to the operational ones.”

The report says new storage needs are linked to the development of trading activity and to the use of natural gas as back-up for intermittent renewable energy sources.

And the report warns that competition from other sources of flexibility will “force the storage industry to develop techniques, on a regular basis, to answer new demands of the market in terms of performance, flexibility and economic efficiency”.

Currently there are 688 underground gas storage facilities in operation around the world, representing a working gas capacity of 377 bcm.

More than two thirds of these sites are in North America ” 414 in the US and 59 in Canada.

Europe has 144 facilities while there are 51 sites in the Commonwealth of Independent States and 18 in Asia-Oceania. There is one site in Argentina and one in Iran.

CEDIGAZ states that there are 95 projects under construction at the moment and most will be completed by 2020/25, while there are another 141 at different stages of planning.