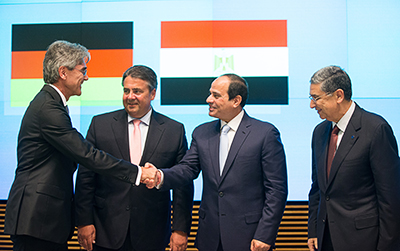 Egypt is set to receive a major boost in its power generation capacity after $4b in financing was secured from international institutions.

The country’s state-owned Egyptian Electricity Holding Company (EEHC) secured $4bn in financing from Deutsche Bank, HSBC and KfW’s Ipex Bank to fund the development of three gas power plants, which have a combined capacity of 14.4 GW.
Three gas-fired combined cycle power plants – Beni Suef, Burullus and New Capital, will each have a capacity of 4.8GW.

The projects are expected to boost the country’s power generation capacity by more than 50% to meet the increasing power demand.

As part of the deal, Siemens will also build up to 12 wind farms with 2 GW capacity in the Gulf of Suez and West Nile areas. The plants will feature 600 turbines.

A rotor blade manufacturing facility will also be constructed by the second half of 2017, in Ain Soukhna region, Egypt. Siemens will train and employ around 1,000 people at the plant.

Earlier, Siemens president and CEO Joe Kaeser said: “With these unprecedented contracts, Siemens and its partners are supporting Egypt’s economic development by using highly efficient natural gas and renewable technologies to create an affordable, reliable and sustainable energy mix for the country’s future.”